The market was relatively quiet yesterday as traders are awaiting the Fed’s announcement later today. The S&P traded in a tight range yesterday with the high and the low less than 15 points apart. My scans were pretty balance last night with 26 bullish signals and 16 bearish signals.

[hana-code-insert name=’adsense-article’ /]That was enough of a bullish skew to push my barometer back in to positive territory, but only a reading of 3.3.

The Fed will announce their decision on interest rates this afternoon and expectations are for a hike of 0.25%.

While the hike is expected, any deviation from the statement could have an adverse effect on the market.

One sector that historically does well during a rising-rate environment is the banking sector.

Banks benefit as the spread increases between what they collect from borrowers versus what they pay out to depositors. With that in mind, I have a bullish trade idea on a bank for you today. That bank is Bank of New York Mellon (NYSE: BK). 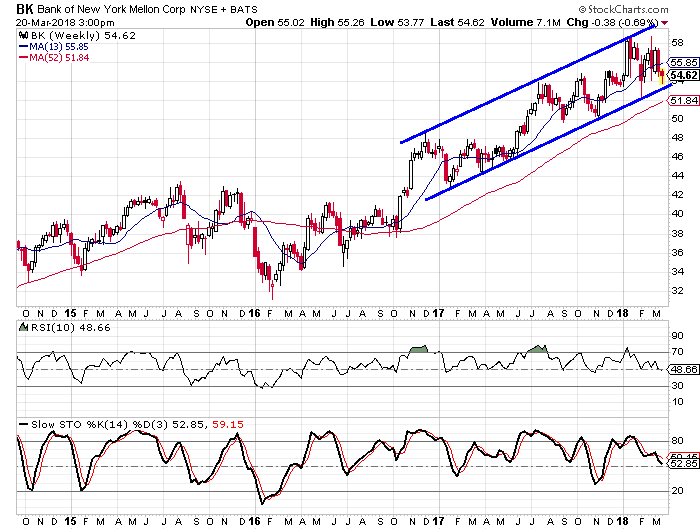 We see that BK has been in an upward sloped trend channel over the past year plus and is close to the lower rail at this time. There is an element of a time cycle at work here as well. The trips from the lower rail to the upper rail that took place from May to July and again from November to January both took approximately nine weeks. If we look to nine weeks from now, that takes us in to late May.

Buy to open the June18 50 strike calls on BK at $5.60 or better. These options expire on June 15. This is a little longer trade idea than we normally work with, but I think the long-term trend in the stock will remain in place and that the stock will move back up to the upper rail of the channel. With the price of the option and a target profit of 100%, the stock needs to get up to $61.20. By the time we get to May, the upper rail should be near or at that level.