Twenty dollars won’t get you much at the grocery store or gas pump these days. But after this year’s bear, investors can pick up some good deals in the market. It’s important, though, to avoid buying equities simply because they have a low price tag. Therefore, I’ve compiled a list of the best stocks under $20 to buy.

None of these companies are household names. Yet, this lack of awareness is part of their appeal. It presents an opportunity for investors to buy shares of these under-the-radar stocks on the cheap. Additionally, each of the companies below has attractive financial attributes.

So, without further ado, here are the best stocks under $20 to buy. 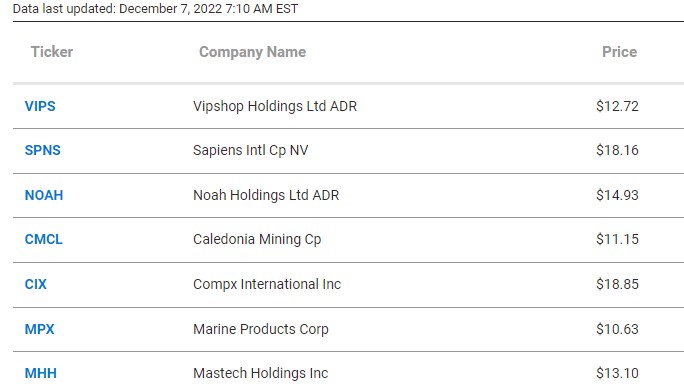 Vipshop (VIPS)
Based in China, Vipshop (NYSE:VIPS) operates the e-commerce website VIP.com, which specializes in online discount sales. Currently, Vipshop commands a market capitalization of $7.8 billion. VIPS has gained 52% since the start of the year and nearly 58% in the past month alone to trade at $12.78 per share.

The stock’s year-to-date performance stands in sharp contrast to many China-based stocks, which are down big this year on concerns about slowing economic growth and China’s zero-COVID policy. However, the government is easing some restrictions following widespread protests.

Vipshop has exceeded analysts’ earnings estimates in each of the past four quarters. Most recently, its Q3 EPS came in 91% higher than expected, although revenue was slightly below estimates. Overall, the company has an attractive financial profile. This includes a strong balance sheet with a cash-to-debt ratio of nearly 7.8, better than 86% of its peers.

Despite shares’ incredible momentum, VIPS remains undervalued. The stock is trading for 7.7 times forward earnings compared with a sector median of 13.8.

Sapiens International (SPNS)
Sapiens International (NASDAQ:SPNS) is perfect for investors who want to venture off the beaten path. Based in Israel, the provider of software solutions for the insurance and financial services industry is right on the cusp between a small and medium-sized enterprise with a market cap of $1.04 billion.

Since the start of the year, SPNS is down 47%. But shares have settled recently, rising around 6% in just over a month to trade at $18.24. This included a pop following the release of the company’s latest quarterly results, with EPS coming in better than expected.

The company has delivered solid revenue growth and strong operating and net margins. The coronavirus pandemic has made people much more attuned to the benefits of insurance, boosting demand for policies, which, in turn, bodes well for Sapiens.

As a bonus, GuruFocus rates the stock “significantly undervalued” based on its proprietary calculation.

Noah Holdings (NOAH)
Noah Holdings (NYSE:NOAH) is another name you may not be familiar with. The wealth management service provider is focused on high-net-worth individuals along with enterprises in its home market of China. Currently, Noah commands a market cap of $1.18 billion.

Since the start of the year, shares dropped more than 51%. In the trailing month, though, NOAH has gained more than 7% to trade at $14.87. This could signal the stock is in the early innings of a recovery.

Noah is attractive due to its fiscal stability. The company’s debt-to-equity ratio of 0.01 is better than 99% of the industry. Additionally, shares are undervalued, trading at 6.8 times trailing earnings, 1.9 times sales and 0.7 times book value. All three metrics are lower than their respective sector median levels.

Caledonia Mining (CMCL)
One of the lesser-known commodity players with potentially compelling upside potential, Caledonia Mining (NYSEAMERICAN:CMCL) is a “cash generative gold producer with a strong growth profile,” per its website. Caledonia’s primary asset is the Blanket Mine in Zimbabwe.

Shares are down less than 4% for the year and have risen 24% in the past three months to trade at $11.22. That said, gold-related enterprises are risky in the current environment.

Recently, the disclosure of the November jobs report suggests the Federal Reserve has failed to cool inflation via rate hikes. Therefore, the central bankers may take off their gloves and raise rates even higher than expected. Ordinarily, this dynamic would bode poorly for investments like CMCL. However, Caledonia could also benefit from the fear trade. With risks rising regarding a global recession, many folks might seek the protection of gold.

Caledonia boasts a high-quality business and outstanding profit margins. Plus, with the market pricing shares at less than 5 times trailing 12-month earnings, CMCL offers a high-risk, high-reward bet as one of the best stocks under $20.

Currently, CompX features a market cap of $234.9 million. Since the start of the year, shares have dropped 16%. However, they appear to be stabilizing, gaining nearly 7% since the end of October to trade at $18.79.

CompX features a stable balance sheet and no debt. To be fair, being debt-free represents a personal goal. In many cases, when corporations are debt-free, it could imply they’re not using their capital efficiently. However, with deflationary forces entering the monetary ecosystem – as defined by an arresting of purchasing power erosion – having no debt represents its own premium.

Fundamentally, the rise in property crime could create more demand for CompX’s products. Finally, CIX trades at 12.1 times TTM earnings, better than 65% of the competition.

Marine Products (MPX)
For those who want to go the contrarian route, Marine Products (NYSE:MPX) is worth consideration. The company designs, manufactures and distributes pleasure and sports boats. It currently has a market cap of $364.4 million after falling 16% year to date to trade at $10.65 per share. Since mid-October, though, MPX has rebounded 33%.

Marine Products isn’t a likely pick in the current bearish economic cycle. Skyrocketing inflation is weighing on consumer sentiment and causing people to rein in discretionary purchases. Spending doesn’t get much more discretionary than buying a powerboat. Yet, the company’s sales may prove resilient thanks to the growing wealth gap. The folks that have money have a lot of it and may be more likely to spend it on big-ticket items.

As with CompX, Marine Products has zero debt. Again, this is not always the greatest metric to target during a bullish (and inflationary) cycle. However, with the Federal Reserve tightening the supply, money essentially becomes more “expensive.” Therefore, leveraging a zero-debt balance sheet affords incredible flexibility and resilience. Additionally, the company sports excellent profit margins.

Mastech Digital (MHH)
Based in Pittsburgh, Mastech Digital (NYSEAMERICAN:MHH) is a digital transformation and information technology services firm. Currently, Mastech features a market cap of $150.6 million. Year to date, MHH has dropped 24% to trade at $12.96.

In early November, the stock sold off sharply following the release of the company’s third-quarter earnings report in which EPS came in below estimates. However, shares appear to have stabilized, rising 1.6% in the past month.

GuruFocus considers MHH “significantly undervalued” based on its proprietary metrics. The stock also appears undervalued based on its forward P/E of 6.6, which is better than 90% of its peers.

Mastech benefits from a strong balance sheet. In particular, the company’s Altman Z-Score of 6.7 reflects a very low bankruptcy risk. In addition, the company’s equity-to-asset ratio stands at 0.74, better than nearly 83% of the competition.

One Percenter: The Smartest Way to Invest $500 Right Now [sponsor]
Millions of hardworking Americans have not done a thing - or have not done enough to prepare for America's next crisis. It doesn't matter if you're rich or poor... young or old. You can benefit from the information in this video. Click here to watch it now.