The good thing about market crashes is that bull markets invariably follow them. And whereas bear markets tend to be measured in months, the subsequent rallies can go on for years.

Since 1928, the average bear market has lasted 15 months while the average bull market lasted three years. Even better, from 1970 on, bull markets have tended to stick around for more than six years on average.

Even with the S&P 500 down 16% in 2022, there’s a good chance it could go lower if a recession hits early next year, as many analysts suspect. There are a number of stocks that are bargains right now, but what follows are two exceptional stocks you’ll regret not buying if the stock market crashes.

General Dynamics
The best defense is a good offense. Investors will want to go on the offensive with military contractor General Dynamics (GD) in the event of a severe economic downturn. Defense spending rarely gets cut, as it’s usually only the source of growth that remains constant through the economy’s ebbs and flows.

With the U.S. militarily supporting Ukraine in its war with Russia, as well as arming neighboring countries against potential threats, defense stocks like General Dynamics are a smart play now and in the future. GD, for example, won a $1.1 billion contractor in August to supply Poland with 250 Abrams battle tanks.​​ 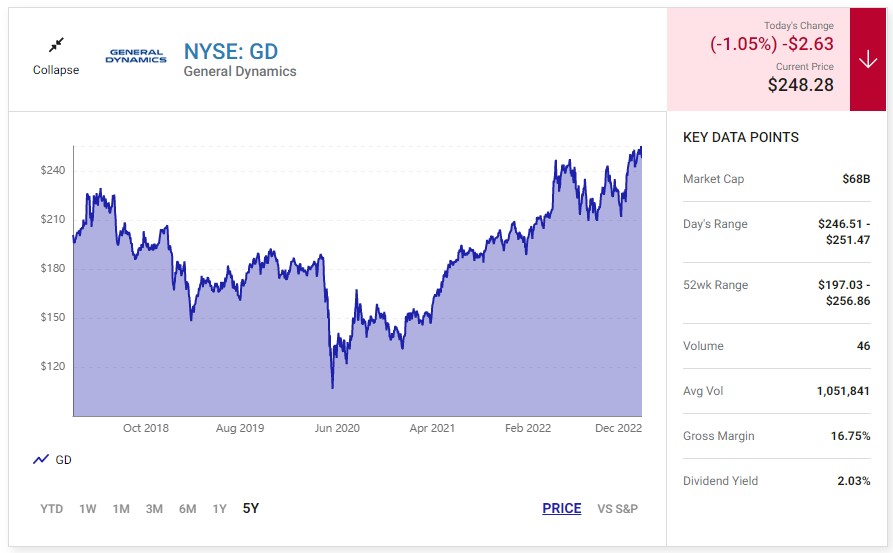 As the third-largest military contractor, General Dynamics had $26.8 billion in military revenue in 2021, representing 70% of total revenue. It is very profitable with double-digit operating margins in almost all of its segments, but it also has a highly successful commercial division producing Gulfstream business jets. Even with all the turmoil in the market this year, General Dynamics has seen strong order flow for the jets, accounting for its operating cash flow growth last quarter, which stood at $1.3 billion.

General Dynamics also pays a dividend of $5.04 per share, which yields 2% annually. It has made a payout every year for 31 years, and has raised the dividend for 28 consecutive years, making it a Dividend Aristocrat.

Genuine Parts
Best-known for its global chain of over 9,600 retail stores that primarily operate under the NAPA Auto Parts banner, Genuine Parts (GPC) also runs an industrial replacement parts and supplies business serving more than 107,000 customers around the world. Its business has shown it can successfully operate in virtually any market condition.

Founded in 1928, Genuine Parts has been through the Great Depression, two World Wars, numerous geopolitical crises, recessions, and a global pandemic. The U.S. auto industry has, until recently, been grappling with weak sales due to supply chain issues that prevented cars from making it to dealer lots. That forced people to hang on to their existing cars longer and make repairs to keep them running.

While demand for new cars is high, prices remain elevated, and even if used car prices are falling, they are still well above pre-pandemic levels. CarGurus says the average used car price dipped under $30,500 in November, a 1% decline from last year, while new car prices are up 1% to $49,700. Both situations will force people to keep their jalopies running longer. 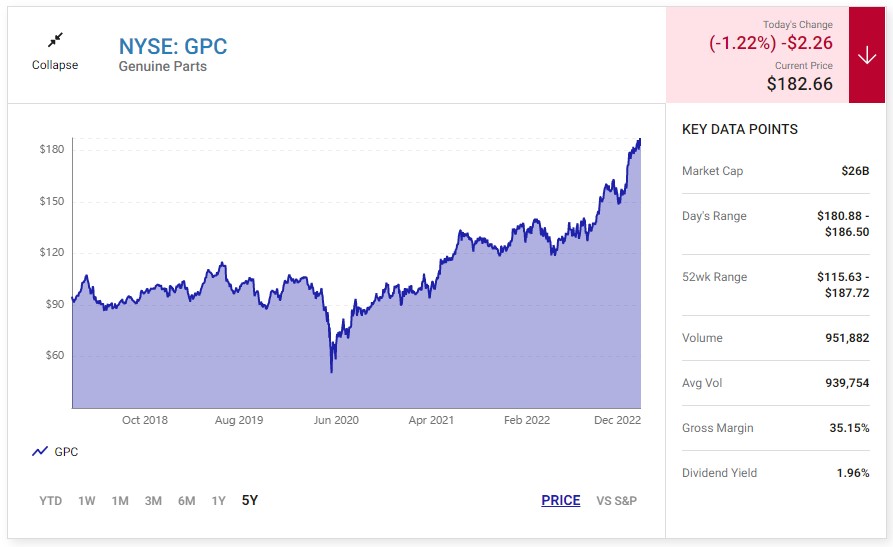 The market recognizes the catbird seat Genuine Parts is in as its shares have been bid up 43% over the past year, but if the market crashes due to a recession the stock could go even higher as the business should continue to boom.

And like General Dynamics, the auto parts retailer has a long history of dividend payments and increases. In fact, a much longer history. Genuine Parts has paid a dividend to shareholders for nearly 100 years and has increased the payout every year since 1948, crowning it a Dividend King. The payout currently yields 1.9% annually.