Stocks moved lower again on Wednesday, making it two days in a row for the main three indices moving lower. The Russell managed a small gain on Tuesday, but it was the worst performer yesterday with a decline of 1.26%.

All 10 sectors lost ground on Wednesday and six of them lost over 1.0%. The energy sector fell 2.91% as the worst performer and the utilities sector dropped 1.97% as the second worst.

The industrial sector experienced the smallest loss at 0.51% and the consumer discretionary sector lost 0.67% as the second best performer.

The big shift in the scans led to a pretty big drop in the barometer. The final reading last night was -43.5 after a reading of -21.4 on Tuesday.

Despite the overwhelming number of stocks on the bearish list, the one trade setup that I liked the best was from the bullish list. The company is First Solar (Nasdaq: FSLR) and it has pretty good fundamental ratings. The EPS rating is at 79 and the SMR rating is a B. 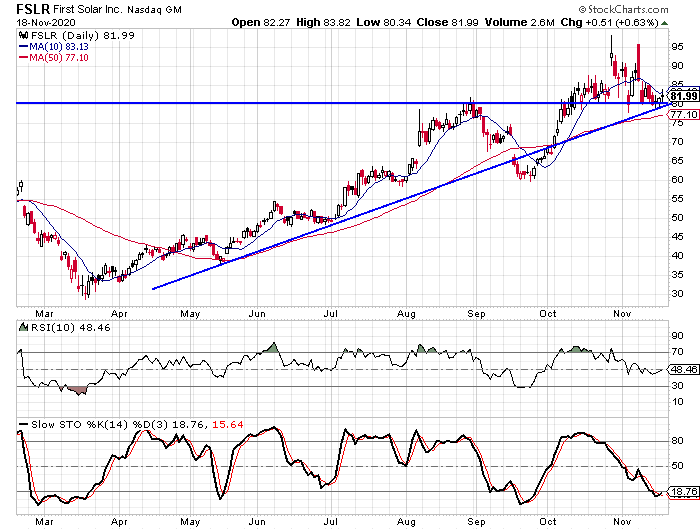 There were several things that I took note of on the chart. The first thing that jumped out was the upward trend. While the trend line isn’t a clean one, the lows from May and June connect with the low from this week. I also couldn’t help but notice how the $80 area served as resistance back in August and now appears to be acting as support. Finally, I couldn’t help but notice how sharply the stock jumped in May, June, and September when the daily stochastic indicators made a bullish crossover. The indicators made a bullish crossover yesterday.