Yesterday was an odd day as far as the index and sector performances. Two of the four indices moved higher with the Dow leading the way with a gain of 0.78% and it was joined in positive territory by the S&P with a gain of 0.48%.

[hana-code-insert name=’adsense-article’ /]Given the split performances of the indices you would expect some evenness in the sector performance, but that wasn’t the case.

Nine of 10 sectors moved higher on the day with the consumer discretionary sector being the lone one in the red with a loss of 0.29%.

No other sectors finished with a gain over one percent.

The string of bearishly skewed readings from my scans came to an end last night as there were 23 bullish signals and 21 bearish signals.

That ends a stretch of 11 straight days with more bearish signals than bullish ones. The barometer remains in negative territory with a reading of -19.3.

Yesterday was also a strange day in terms of the stocks on the list. It seemed like the stocks on the bearish list had more positive fundamentals than the ones on the bullish list. One stock’s chart that stood out was Anadarko Petroleum (NYSE: APC) and its fundamentals were mixed. The EPS rating is a solid 77, but the SMR rating is a D. Earnings grew by 187% in its last quarterly report, but sales declined. The company reports again on July 31. 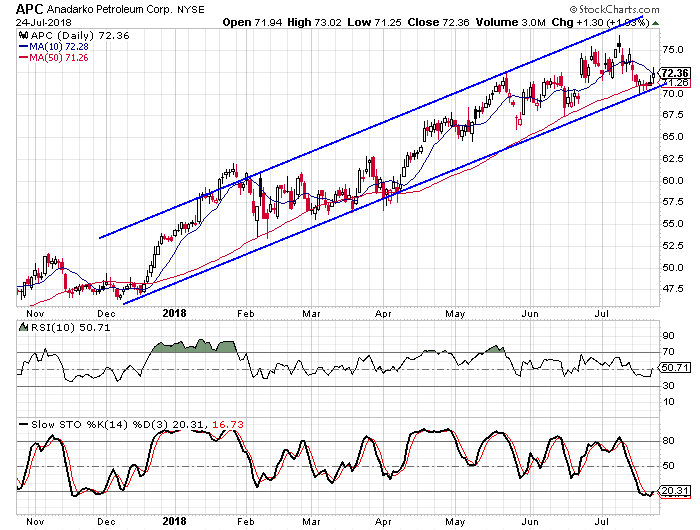 The stock has formed an upwardly sloped trend channel over the last eight months and it just bounced off of the lower rail. That lower rail is also right at the 50-day moving average so that gives the stock two layers of support to bounce off of. The previous three earnings reports have had very little impact on the price of the stock and I am looking for that to be the case again.

Buy to open the Sep18 $70-strike calls on APC at $5.00 or better. These options expire on September 21. Based on the trajectory of the channel, I am targeting a stock price of $80 and that would make these options worth $10 and give us a 100% gain. I would recommend shutting the trade down if the price drops below $70.