Three of the four main indices gained ground yesterday, but it was anything but a day where the bulls took control. All four opened in negative territory and then moved in to positive territory during midday trading. None of the moves were big moves, but the Nasdaq led the way with a gain of 0.28% followed by the S&P with a gain of 0.18%. The Russell gained 0.09% and the Dow was the lone losing index with a loss of 0.06%.

While the indices all moved higher, the sectors were primarily lower with seven moving down and three moving higher.

[hana-code-insert name=’adsense-article’ /]The financial sector was the top performer with a gain of 1.34% with the tech sector finishing second best with a gain of 0.51%.

The trade idea for today didn’t come from last night’s scans, but rather last Friday’s scans.

I felt we needed a bullish trade idea after three straight bearish ones and the subject of the idea is ProShares Ultra Bloomberg Crude Oil (NYSE: UCO). Over the course of the Thursday and Friday, 15 of the 40 bullish signals received were from the energy sector and it was one of them. 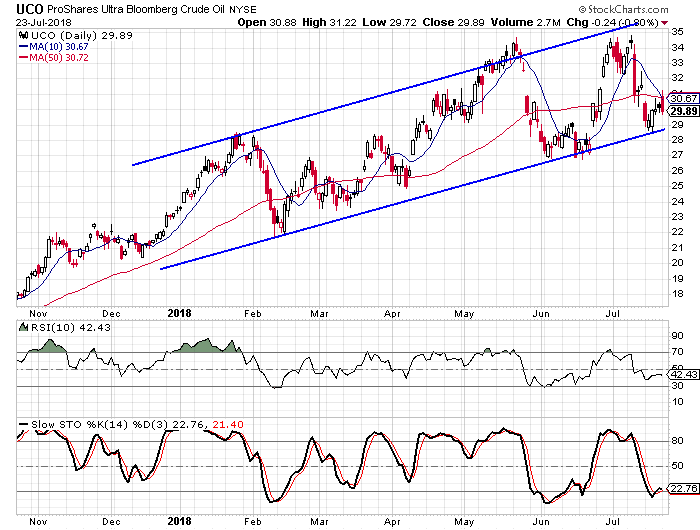 You can see that a trend channel has formed over the course of the first half of the year and the fund is now attempting to bounce off of the lower rail. The pattern is similar to what we saw in early June with the stochastic readings and the chart. I am looking for another upward move in the cycle and look for it to move above the $35 level this time.