What a week it has been. In a holiday shortened week we saw a big down day followed by a big up day, and then another big down day followed by another big up day. On the week, the indices experienced mixed results. As of noon Friday, the Dow was down 0.51% on the week while the S&P was up 0.4%. The Nasdaq was by far the best performing index of the main three with a gain of 1.5%.

The big news items from the week that drove the back and forth moves were based on trade policies, politics and finally the employment report.

The May employment report was better than expected in job growth and the unemployment rate.

The average hourly earnings were in line with expectations.

This led to the big gain on Friday.

The wild swings led to a number of my option trade ideas to either hit their target or hit their stops.

On the positive side, the puts on Johnson Controls and Goodyear both hit the 100% targets I had suggested. On the negative side, Century Aluminum, the iShares Biotech ETF, Avis Budget and Allegheny technology all hit their stops this week. The average loss on those four was held to 32.4%. 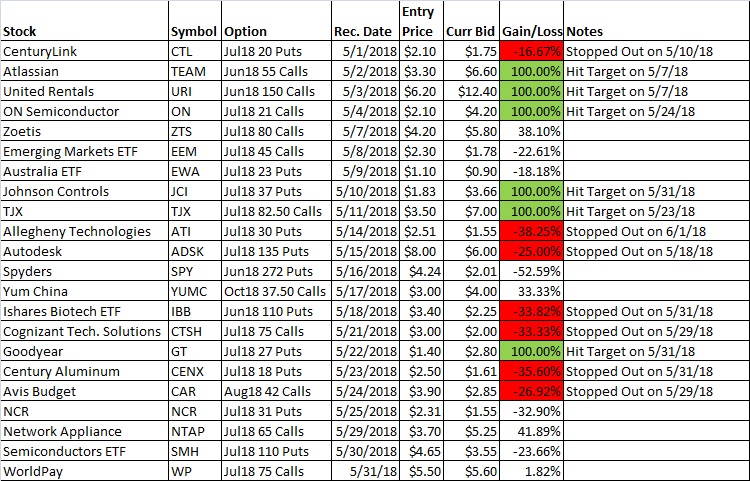 For the month of May as a whole, there were 22 trade ideas in all. There were 13 that were opened and closed during the month with six hitting the 100% targets and seven that triggered their stops. The average win was obviously 100% and the average loss for the seven that were stopped out was just under 30%.

If you can get these types of results on a consistent basis, you can make a lot of money by winning on almost half your trades and having an average winning percentage of 100% while keeping the average loss under 30%.

Look at it this way, if you had put $1000 in to each of the 13 trade that were opened and have closed, you would made $6,000 in profits on the winners and you would have had $2,100 in losses on the seven losing trades. This gives you $3,900 in profits on $13,000 of investments. That is a 30% return on these 13 trades. Obviously this is only one month and there are still nine other trade ideas that are open, but all in all May was a successful month.