After the May employment report came in about as well as it could Friday morning, stocks moved solidly to upside. All three of the main indices gained ground with the Nasdaq leading the way with a 1.51% move. The S&P gained 1.08% and the Dow gained 0.9% on the day. In a reversal of roles, the Russell lagged the main three with a gain of 0.88%. The RUT has been outpacing the main three in recent weeks.

Eight of the ten main sectors moved higher on Friday while one broke even and another lost ground. It was the utilities sector that lost ground and it lost 1.53%.

[hana-code-insert name=’adsense-article’ /]The consumer staples sector was the one that broke even.

In all there were six sectors that gained over one percent.

My scans were bullishly skewed for the third straight night and the ratio was 72 names on the bullish list compared to 25 names on the bearish list.

One of the names on the bullish list was Charles Schwab Corp. (NYSE: SCHW). 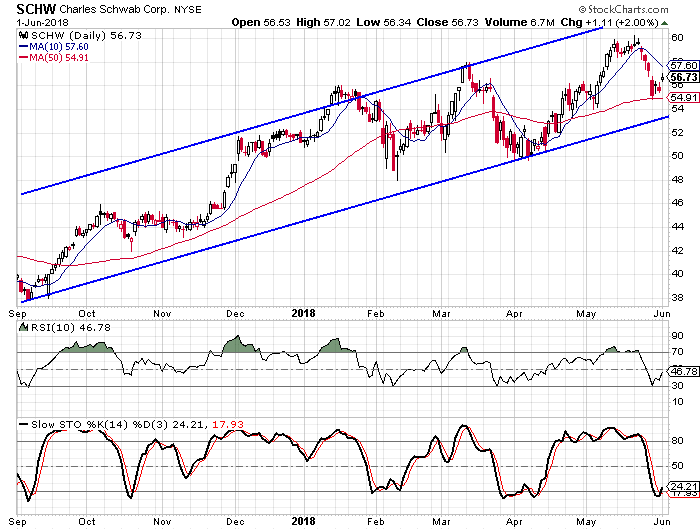 Buy to open the Jul18 $55-strike calls on SCHW at $3.40 or better. These options expire on July 20. For these options to double, the stock will need to get above the $60 level. The upper rail of the channel is well above that level. I would suggest a target of 100% on the plus side with a stop at $54.50 to protect the downside.