What a strange day yesterday was. When I woke up, Dow futures were down over 500 points due to the tariff battle going on between the U.S. and China. The S&P dropped sharply on the open and was down over 1.5% in the first few minutes of trading.

[hana-code-insert name=’adsense-article’ /]But that was the low of the day as stocks climbed throughout the day and ended the day up 1.16%.

Nine of the ten main sectors moved higher on Wednesday with only energy finishing lower.

Five sectors were up over one percent and they were led by the consumer discretionary sector with a gain of 1.84%.

The scans were skewed the bullish side once again, but only by a count of 28-5 last night.

This is the seventh straight night that the scans have been skewed to the bullish side.

Even though the scans were bullishly skewed, I have a bearish trade idea for you today and it is on Apache Corp. (NYSE: APA). Apache’s fundamentals are average, but the sentiment is skewed toward the bullish side and the chart shows that there is some resistance looming. 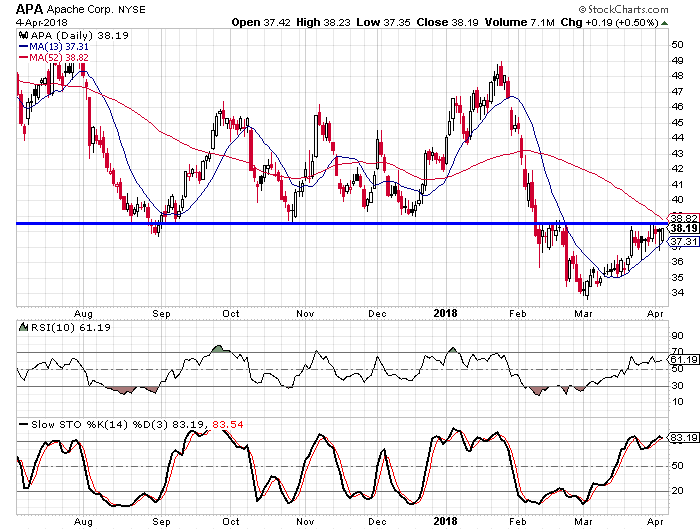 We see that the stock has used the $38.50 level as support back in October and it got close again in December. In February, that same area acted as resistance and now in the last few days the stock is struggling to get higher. We also see the 50-day moving average is just overhead and could act as a second layer of resistance.

Buy to open the May18 40 strike puts on APA at $3.25 or better. These options expire on May18. For this options to double the stock will need to get to $33.50 and that is just below the low we saw in early March. Given the downward trend, along with the overly optimistic sentiment, I think the stock can get to a new low in the next month and a half.