After the huge reversal on Wednesday, stocks moved higher again yesterday with the S&P gaining 0.69%. The Dow was the strongest of the indices with a gain of 0.99%.

The Nasdaq lagged slightly with a gain of 0.49%. Of course today’s action will be influenced by the March employment report which was due out at 8:30 ET.

[hana-code-insert name=’adsense-article’ /]Once again we saw nine of the ten sectors move higher yesterday, but this time the healthcare sector was the only one in the red.

My scans remained skewed toward the bullish side with 22 bullish signals and only four bearish signals.

That was enough to keep the barometer in positive territory for an eighth straight night.

Among the names on the bullish list was Match Group, Inc. (Nasdaq: MTCH). Yes, this is the parent company of Match.com. And the fundamentals are pretty strong with the exception of last quarter’s EPS growth. The profit margin, return on equity, and sales growth are all above average. 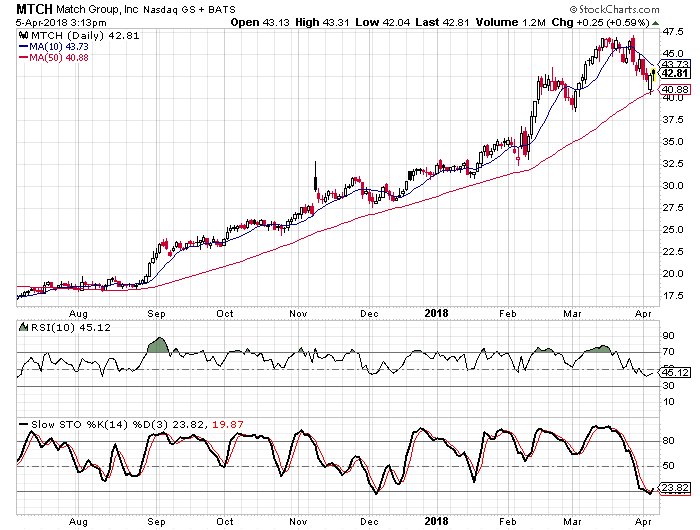 The daily chart of MTCH is what caught my eye first with the strong move to the upside and the way the stock has been riding the 50-day moving average higher since August. We see that the stochastic readings are the lowest they have been since December and this is only the third time in the past year the readings have reached oversold territory.

Buy to open the June18 41 strike calls on MTCH at $4.90 or better. These options expire on June 15. In order for these options to double, the stock will need to reach $49.80 which is 16.4% above the current price. Under normal circumstances that might be a concern, but when you consider how MTCH has performed over the past year, it isn’t. On four separate occasions, the stock has had 20% jumps that took just a few weeks. In this case, we have 71 days for the stock to move up by 16.4%.