Stocks bounced back a little yesterday as I thought they might. There are a great number of stocks that are oversold based on the daily oscillators, or at least there were on Monday night. The three main indices all gained over one percent on Tuesday.

[hana-code-insert name=’adsense-article’ /]In a reversal of Monday, all ten sectors moved higher yesterday and the weakest one was the utilities sector after it was the leader on Monday.

The sector did gain 0.32%, but all nine of the others gained over one percent with the energy sector gaining over 2% to lead the way.

The scans were rather lopsided last night with 73 bullish signals to only seven bearish signals.

What struck me the most was that of the bullish signals, 29 were from the tech sector and 14 of those were semiconductor stocks.

Given the numbers above, the trade idea for today is a bullish one on the VanEck Vectors Semiconductor ETF (NYSE: SMH).

With tech getting hit hardest during the recent pullback, the sentiment toward the SMH just hit its sixth lowest reading of the past year on Monday. Previous low readings have come just ahead of rallies. 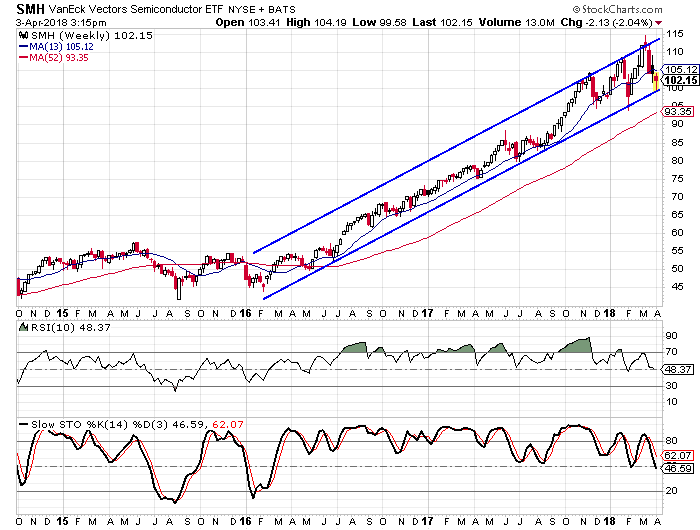 We see the trend channel the SMH has been in since early 2016 and I for one have recommended call options several times during this run. The just bounced off of the lower rail of the channel and the oscillators are down in the same area they have been in just before the most recent bounces.