Stocks got hit pretty hard with another round of selling yesterday with the Dow losing over 700 points at its low of the day. The lows were hit around 2:00 ET, and stocks proceeded to bounce back a little over the last two hours of trading.

Despite the bounce back, the three main indices still fell sharply with the Dow dropping the least at 1.9%. The Nasdaq had the worst performance of the three with a loss of 2.74%.

[hana-code-insert name=’adsense-article’ /]All ten of the main sectors lost ground with nine of them losing over 2%.

The only one that wasn’t down over 2% was the utilities sector and it only lost 0.79%.

My scans produced more bullish signals than bearish signals once again, but the discrepancy was much smaller with 21 stocks on the bullish list and 14 on the bearish list.

I can’t help but think we are at a critical juncture for the market.

The S&P is facing a major support level in the form of its 52-week moving average. If it breaks, we could see the index down to the 2000 level before we see another major support level. Despite my feelings, I have a bullish recommendation on the SPDR S&P 500 (NYSE: SPY). 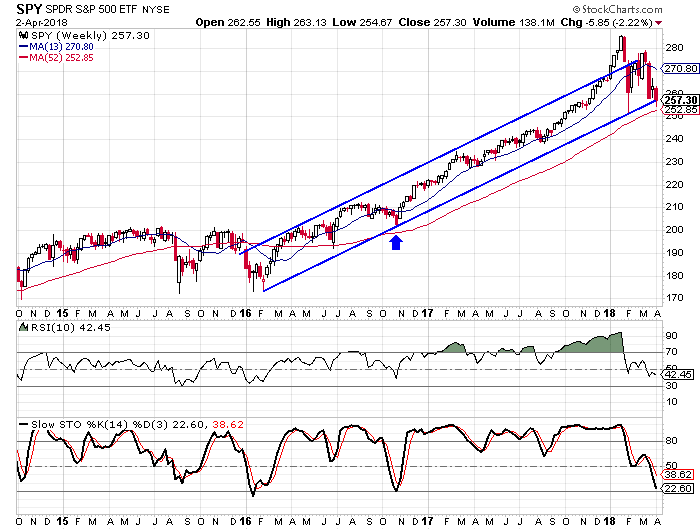 The Spyders are right on the lower rail of the trend channel that we have seen before. The bulk of the trading activity from the beginning of 2016 until now has been contained within this channel. We also see that the weekly oscillators are at the lowest levels they have been at since October ’16.

Buy to open the May18 255 strike calls on SPY at $9.20 or better. These options expire on May18. Normally I target 100% gains for the trade ideas in this space, but for this one I am making it a 50% target gain. Given the suggested entry price and the strike price, the Spyders will need to get to $268.80 for the target to get hit, but based on how oversold we are I think that is reasonable. I would also suggest a stop at $252. This would mean the trendline and the 52-week moving average had been broken and would warrant protecting the downside.