[hana-code-insert name=’adsense-article’ /]For the week, consumer staples led the way with a gain of 3.48% while the telecom sector was the only sector to lose ground last week.

My scans produced more bullish signals than bearish signals yet again on Thursday, but the disparity did close up considerably.

There were 26 bullish signals and six bearish signals for a difference of 20.

That is much lower than the 148 differential from Wednesday night.

Once again I have a bullish trade idea for you as I look for the market to continue bouncing back from the recent selling. Charles Schwab Corp. (NYSE: SCHW) was on the bullish list the other night and it is a stock I have been following for some time due to the strong fundamentals the company displays. The EPS rating from IBD is a 94 and the SMR rating is an A. 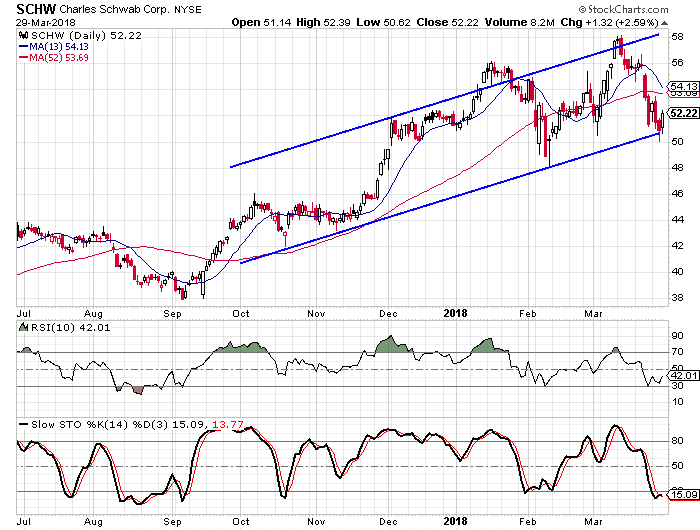 Looking at the chart for Schwab, we see that the stock has been trending higher within a trend channel over the past six months. The stock just bounced off of the lower rail of the channel and the stochastics just made a bullish crossover. In addition to that, the sentiment toward the stock hit its third lowest level of the past year on Tuesday.

Buy to open the May18 50 strike calls on SCHW at $3.90 or better. These options expire on May18. I see the stock moving back to the upper rail of the channel in the next five to six weeks and that should put the stock above the $58 level and would make these options worth over $8.00 and would give us a double on the trade. I like the fact that the over half of the premium is intrinsic value at this time.