We saw the market make a big reversal yesterday with most stocks opening higher and then reversing course.

[hana-code-insert name=’adsense-article’ /]I mentioned in yesterday’s article that the sentiment toward the market had gotten to the point of “extreme” optimism and the reversal could be an indication that we are about to go through a risk-off period.

Since the beginning of December, we have essentially been in a risk-on environment and that has led the utilities to underperform the rest of the market.

Duke Energy has moved down in seven straight weeks and that has put it in the most oversold situation that it has been in the last three and a half years based on the 10-week RSI.

If we connect the lows from late ’15 and late ’16, we see a trendline that comes in to play with where the stock is currently. 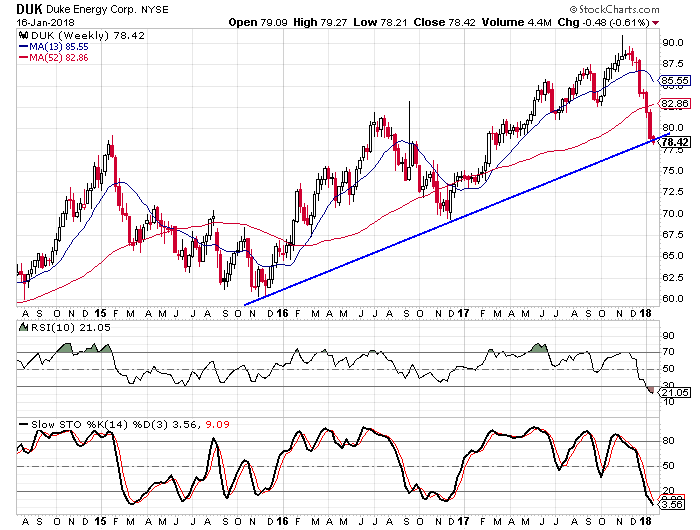 In addition to the trendline and the oversold status, the sentiment toward Duke is extremely pessimistic at this point. In fact, the overall sentiment reached the lowest level it has reached since November ’16 on January 10.

There have only been two instances in the past year where the sentiment was close to as pessimistic as it is now and those were in late June and late September. In both of those instances the stock rallied over the next couple of months.

Buy to open the April18 75 strike calls on DUK at $4.50 or better. The rallies after the extreme lows in sentiment in the summer and the fall both exceeded 7.0%. A similar rally at this point would take the stock up to the $84 level and that would make these options worth $9.00 based on the intrinsic value alone. This would give investors a 100% gain in approximately two months.