Texas-based diversified financial holding company Hilltop Holdings Inc. (NYSE: HTH) seems to be ready for an upmove after a brief pullback according to its latest charts.

There are quite a few bullish indicators in HTH’s charts. 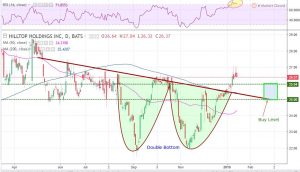 #2 Flag Breakout in Weekly Chart: As you can see from the weekly chart of HTH, the stock was in a strong uptrend from the end of January 2016 to end of December 2016.

[hana-code-insert name=’adsense-article’ /]Then the stock started consolidating and was in a narrow range.

This is a classic flag pattern and is marked in the chart below.

After almost a year of consolidation, on the week ending December 25, 2017, the stock broke out of the flag.

A Flag is a continuation pattern.

Whenever a stock breaks out of the flag pattern, it typically continues its previous trend (uptrend in this case).

However, a retest of the flag pattern’s breakout level usually happens before resuming the trend. 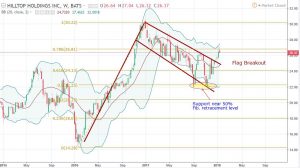 #3 Support near key Fibonacci Level: During the formation of the flag pattern, the stock had taken support at the 50% Fibonacci retracement level of the move from $14.28 to $30.60 before finally breaking out of the flag pattern. This is a very good support level for the stock and indicates that HTH is quite unlikely to break down from here.

#4 Bollinger Bands Support Level: The weekly chart of HTH shows that the stock is currently near the upper band of the Bollinger band. The middle band of Bollinger band is near the flag pattern breakout level and acts as a good support level.

Buy Levels: If you want to get in on this trade, you can purchase shares of HTH when it pulls back to the levels between $24.90 and $25.94. This is marked in the daily chart as a green rectangle.

TP: Our target price is $35 in the next 6 months. You can also opt to book half once the stock reaches its previous high price of $31.

SL: To limit risk, place a stop loss at $23.20, which is below the previous low of the daily chart. Note that this stop loss is on a closing basis.

In other words, this trade offers nearly 3X to 6X more potential upside than downside.

Risks to Consider
The stock may reverse its overall trend if it breaks down with high volume from the 50% Fibonacci level of weekly chart. The sell-off of the stock could also be triggered in case of any negative news, overall weakness in the market, or any regulatory changes in its sector.