The well-known bank holding company, Banc of California Inc. (NYSE: BANC) shows signs of an upcoming price surge based on its latest charts. The California-based company has many bullish signs on its charts.

#1 IH&S Pattern in Daily chart: As you can see from the daily chart of BANC below, the stock has been forming an Inverted Head and Shoulders (IH&S) pattern over the past several months.

[hana-code-insert name=’adsense-article’ /]An IH&S pattern is a strong bullish pattern.

Once the formation of the IH&S pattern is complete, the stock may move higher in the short term.

This is marked in the chart as shown below.

A double bottom pattern is a bullish pattern and indicates that the stock price may increase in the near future. 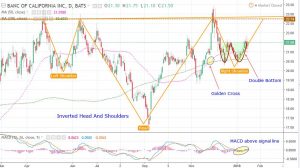 #4 MACD above Signal Line: In the daily chart, the MACD (light blue color) has crossed above the MACD signal line (orange color). A potential buy signal is generated when the MACD line crosses above the MACD Signal Line and it typically indicates a bullish setup. 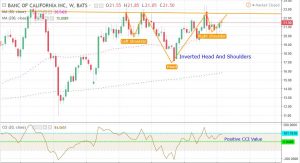 #5 Weekly IH&S: The weekly chart of BANC also shows the formation of the Inverted Head and Shoulders pattern. This is marked in the chart below. After an upmove, the stock corrected to around $17. Since then, the stock has been consolidating and has been forming an IH&S pattern on the weekly chart. The completion of this would indicate that the earlier uptrend may resume.

#6 Positive CCI:  The weekly chart of BANC shows that the readings of CCI are high positive values. This usually means that the prices are very much above the average price and also indicates strength. Once the CCI value moves above +100, there would be a strong price action that can potentially start or reinforce an uptrend.

Buy Price: If you want to get in on this trade, you can purchase half the shares of BANC at the current price of $21.50 and the rest once the stock breaks out of the IH&S pattern. This breakout level translates to a daily close above $23.20.

TP: Our target price based on the IH&S pattern is $32.

SL: To limit risk, place a stop loss below the shoulder of the IH&S pattern. This translates to $19.20. Note that this stop loss is on a closing basis.

Our target potential upside is almost 36%-49% in the next 6 months.

In other words, this trade offers nearly 2x to 4.5x more potential upside than downside.

Risks to Consider
The stock may reverse its overall trend if it breaks down with high volume the current level before completing the formation of the Inverted Head and Shoulders pattern. The sell-off of the stock could also be triggered in case of any negative news, overall weakness in the market, or any regulatory changes in the sector.