Warren Buffett’s Berkshire Hathaway owns multiple stocks across different industries. However, one place the company often shies away from is tech. Still, Buffett has made a few exceptions over the years. The most recent exception being Taiwan Semiconductor Manufacturing (TSM), or TSMC.

The investment thesis behind TSMC is simple enough because the company’s chips go into many electronic devices around you. However, it utilizes highly complex technology, which makes understanding why Taiwan Semiconductor’s chips are better than others complex.

Still, it’s a significant investment, with 1.7% of Berkshire’s portfolio (about $5.6 billion) dedicated to TSMC. So should you follow Berkshire and purchase TSMC?

Taiwan Semiconductor makes chips that others design
TSMC is a chip foundry company. Essentially, a customer like Apple or Nvidia designs a chip (known as fabless design), then TSMC fabricates it. So when Apple made waves with its new M1 chip design, it farmed out the manufacturing of it to TSMC.

This is a lucrative position, as TSMC doesn’t need to worry about advertising or figuring out what the consumer wants. It just makes what its customers ask for. On the flip side, if an economic downturn occurs, the demand for TSMC’s products decreases because its customers don’t need as many components. 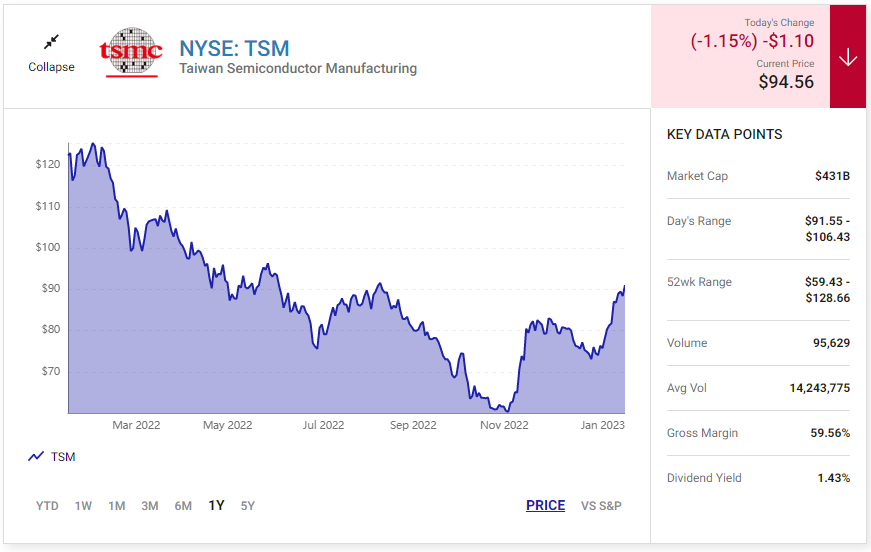 Regarding real competition for technology, Samsung is the only other factory producing 3 nanometer (nm) or 5 nm chips (sorry, Intel). The smaller the chip, the more transistors these companies can pack in, making a more powerful product.

Still, with the demand for these mighty chips, both semiconductor companies have plenty of room in this space.

TSMC has leading manufacturing technology and a great business model, but how are its financials?

Currency exchange has a tangible effect on its financials
TSMC recently wrapped up its fourth quarter, which saw strong revenue growth of 26.7% to $19.93 billion. However, calculated in New Taiwan dollars, revenue rose 42.8%. If you’re curious how much TSMC’s industry-leading tech earns, 54% of total wafer revenue was derived from its advanced technologies segment (defined as 7 nm chips or smaller).

The first quarter won’t be quite as strong as management’s projections, depending on whether or not you convert the currency.

Because TSMC is a U.S.-listed stock, it must report its finances in U.S. dollars, even if the company doesn’t convert them in practice. This could make a significant difference when analyzing the company’s financial health. Regardless, TSMC’s growth won’t be what it was in 2022.

In fact, the average Wall Street analyst is guiding for a 0.7% revenue decline (in U.S. dollars) for 2023. However, in 2024, analysts expect a 21.9% increase. This bodes well for long-term investors in TSMC, although the next year could be a bit bumpy.

This is why the stock trades at a fairly low price-to-earnings ratio. 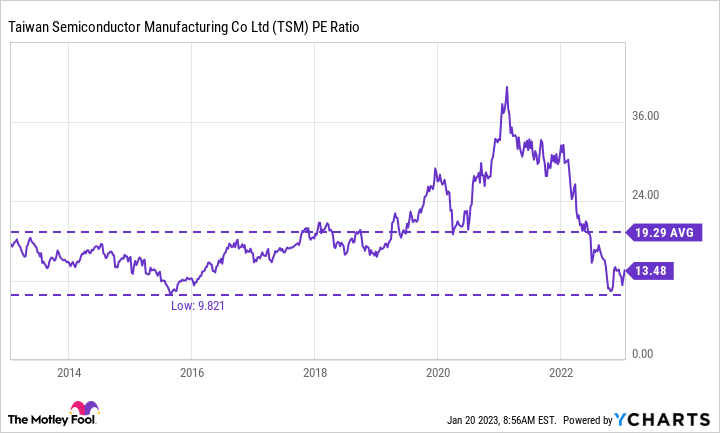 Many investors don’t want to wait a year for TSMC to recover; however, long-term investors have a clear advantage here. They can afford to purchase the stock and wait it out while the business recovers. In the meantime, TSMC pays a healthy 2% dividend, which isn’t a ton, but it’s better than nothing.

TSMC is a top chip manufacturer but it’s headed for a slight slowdown in 2023. This pessimism and slowdown are likely why Buffett’s company decided to grab shares, because it is also invested in the long term. I think TSMC is an excellent buy at these prices — if you’re patient enough to wait for a recovery.