As we get into earnings season, the investment calendars are starting to fill up. That has investors wondering what the hot stocks for tomorrow will be.

While it helps that the Federal Reserve has entered its blackout period, it doesn’t help that we will have a Federal Open Market Committee (FOMC) meeting in early February. That’s when the Fed is forecast to raise interest rates by 25 basis points. That increase could add to the volatility stock investors have been experiencing for the past year.

Even though earnings began more than a week ago, we’re finally starting to get to the heavy-hitting names as it relates to the consumer, economy and tech.

Netflix (NASDAQ:NFLX) led the reporting last week for tech, and now Big Tech will be in the spotlight again. Let’s look at the hot stocks for Wednesday, Jan. 25.

Microsoft (MSFT)
Microsoft (NASDAQ:MSFT) is the second-largest company in the U.S. by market capitalization, sporting a market cap of $1.8 trillion. The company will report earnings after the close on Tuesday, so it will be in focus on Wednesday morning.

Keep in mind that just a few weeks ago, Microsoft stock was on the verge of retesting its 52-week lows. While the market has been trading much better lately, it would be a mistake for investors to completely let their guard down. 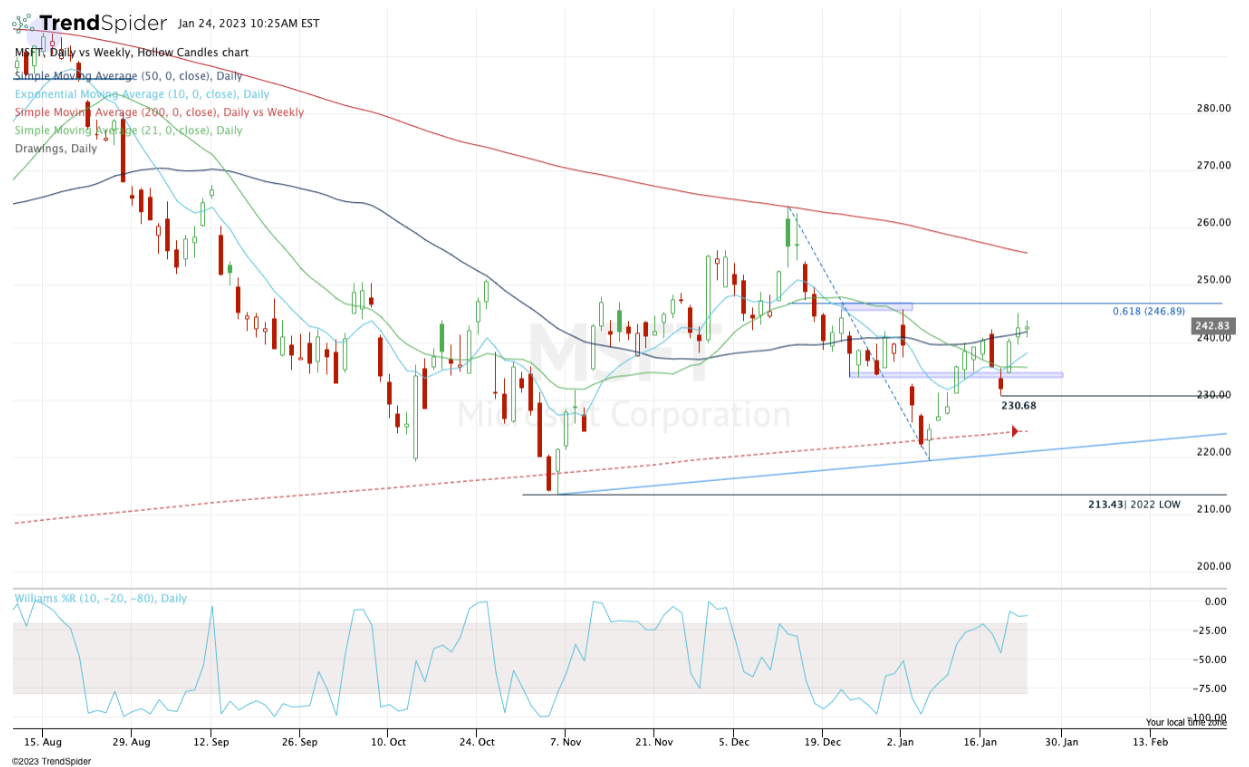 Analysts expect roughly 2.5% revenue growth to approximately $53 billion. On the earnings front, they actually expect a 7.7% dip down to $2.29 a share. Investors will be looking for a top- and bottom-line beat and an upbeat outlook from the company.

Microsoft recently announced a headcount reduction in its workforce, joining Amazon (NASDAQ:AMZN) and other big-cap tech stocks. It’s also been in the news following a multi-billion deal with OpenAI, the company behind the artificial intelligence (AI) chatbot, ChatGPT. So investors will want more details on that front.

Boeing (BA)
Boeing (NYSE:BA) will report earnings before the open on Wednesday. This stock became well-known for the implosion it endured following the Covid-19 pandemic. Shares had already been struggling from an incident with its 737 MAX aircraft in the first quarter of 2019. A year later, a global pandemic would send the stock into a tailspin. 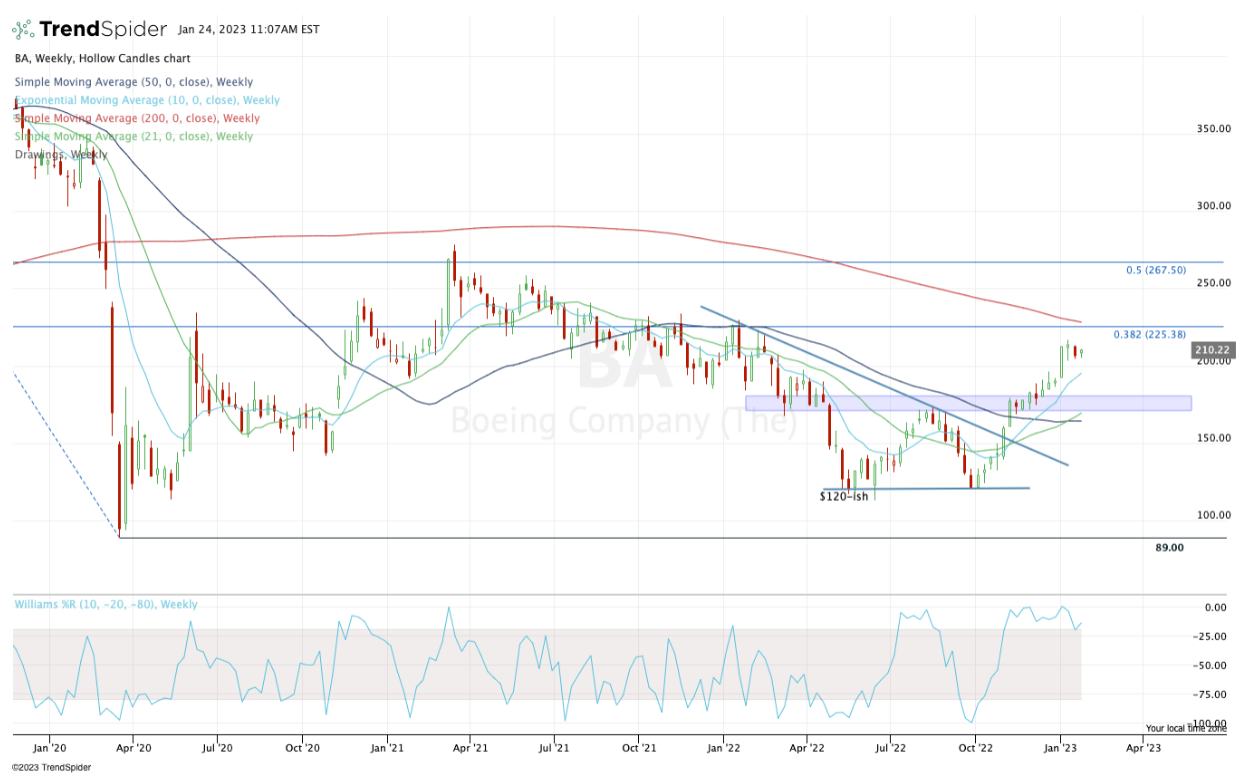 As recently as October, Boeing stock was on the verge of taking out its 2022 low. However, it was able to reverse and go on a six-week rally. Before last week’s decline, Boeing had climbed in 13 of the past 15 weeks, rallying 79% in the process. Does that set the bar pretty high for earnings?

We’re at an interesting point in the economic cycle. On the one hand, fears of a recession are looming in the not-too-distant future. On the other hand, we just heard from Delta Air Lines (NYSE:DAL), United Airlines (NASDAQ:UAL) and others that air traffic demand is robust. Then you toss in defense spending, and Boeing certainly has some potential catalysts.

The one question is, how high has the bar gotten after the stock’s massive rally?

The Chart: Keep an eye on recent resistance near $215. Above that opens the door up to the $225 to $227 zone. On the downside, bulls want to see Boeing hold the rising 10-week moving average. Below that technically opens the door to the $170 to $180 zone.

Tesla (TSLA)
Call it a tech company, call it an automaker… call Tesla (NASDAQ:TSLA) whatever you want, but it will be in focus after the close on Wednesday when it reports its fourth-quarter results.

This stock has become extremely volatile over the past few months, and all eyes will be on Tesla and Elon Musk on Wednesday. Shares fell more than 67% from the August high to the recent low, while logging five-straight down months. From its all-time high, shares suffered a peak-to-trough loss of 75%. 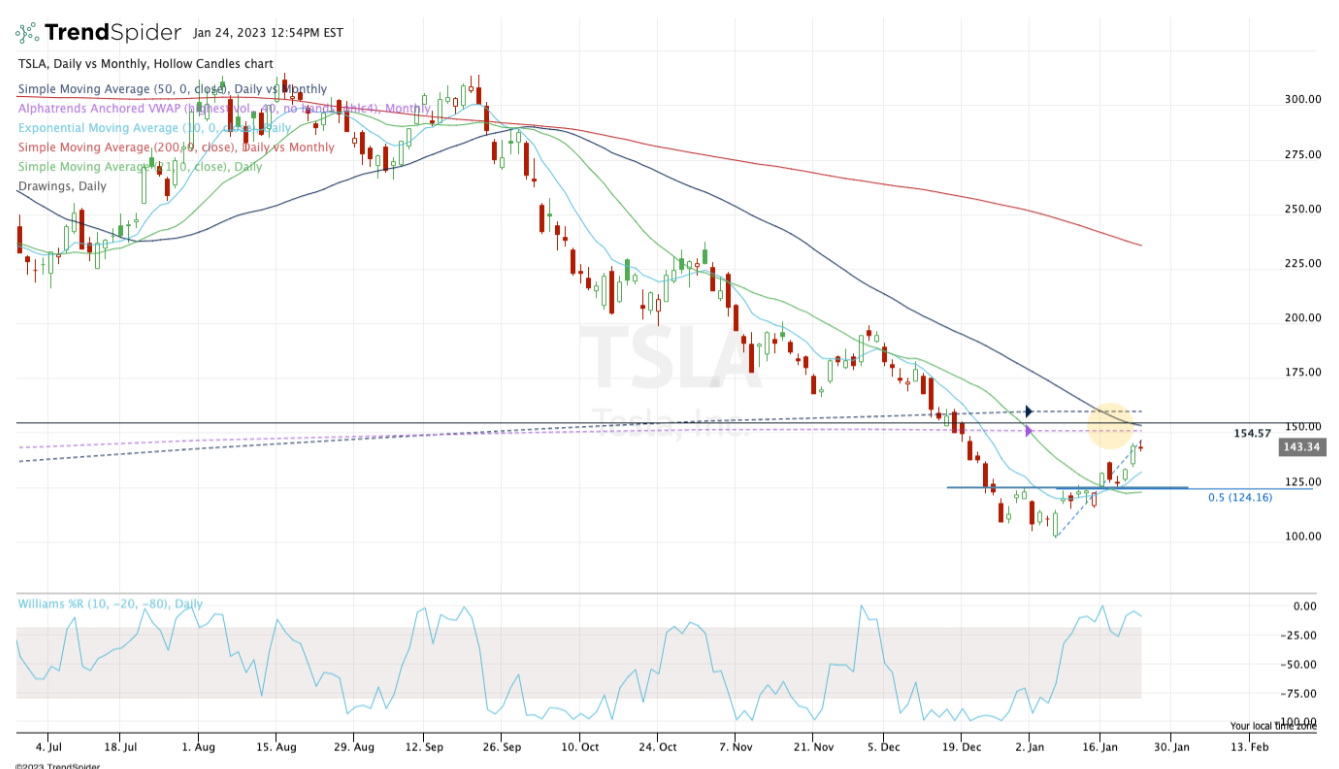 Despite record fourth-quarter deliveries and strong forecasts for 2023, Tesla stock has still struggled, although it’s been rebounding nicely, up more than 40% from the recent low.

The Chart: On the upside, the $150 to $155 area is massive. If the bulls can reclaim it, it could open the door back up to $200. Otherwise, this area may act as resistance in the intermediate future. On the downside, bulls want to see Tesla stock hold the $120 to $125 zone.