The market’s opinion of Roku (ROKU) these days isn’t great. Shares of the streaming TV pioneer hit a three-year low late last week, dogged by another bearish thesis, which — like the last shot — may prove to be unfounded. The stock is down a blistering 87% since peaking in July of last year.

The sticking point this time is what a prolonged recession will do to Roku’s ad-supported business model. It’s fair on the surface, but not as sharp an arrow once you look past the fancy fletching. The stock’s slide, which began in the latter half of last year, was the handiwork of naysayers arguing that a TV for homebodies was going to lose traction as people ventured out into the world again in the COVID-19 recovery process. Despite what Roku’s grim stock chart may show you, that scenario didn’t play out either.

Learning from reruns
The last 15 months have been bruising for Roku shareholders, but did the initial bearish thesis land its punch? Roku’s popularity has only grown since the stock’s apex last summer. People have largely relished the pre-pandemic social hotspots now that vaccinations are widely available, but they’re only streaming more once they get back home.

Active accounts for Roku are at a record 63.1 million, 14% higher than the user headcount was last summer when the stock was hitting all-time highs. The 20.7 billion hours collectively streamed through Roku’s hub last quarter is a 19% year-over-year improvement. Usage outpacing active accounts growth means the average Roku home is streaming more — not less — than a year ago. The reopening of the country last year did not make Roku obsolete. The platform simply became a more essential part of winding down. 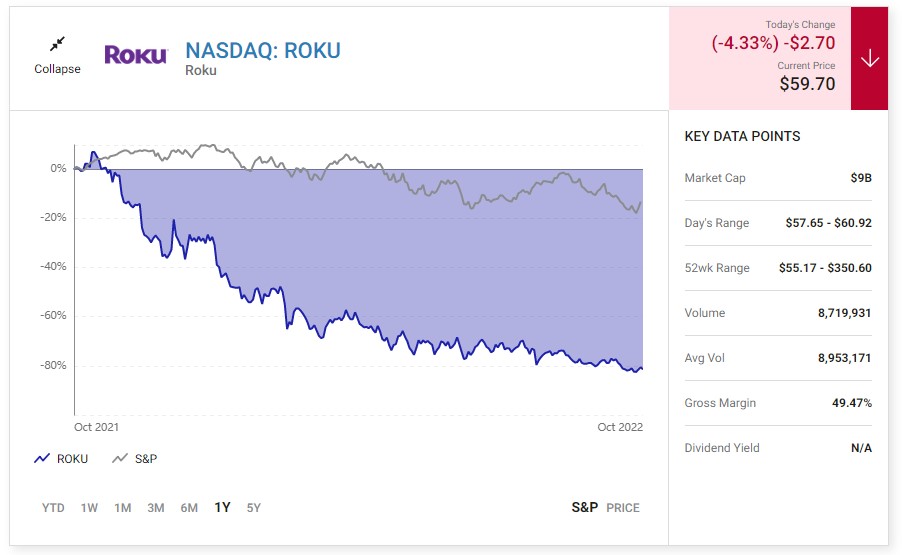 Obviously there are flaws here. The window has been cracked open by some breezy headwinds. Roku is back in the red this year after turning profitable through the second half of 2020 and all of 2021. Wall Street pros don’t see a return to profitability happening anytime soon. Margins have contracted, initially on supply chain constraints that began dinging its low-margin hardware business, but more recently on its high-margin platform segment. Roku is making big investments in content and making its platform stickier.

This brings me to the second bearish thesis: pain for ad-supported business models if consumer pockets run empty. A white glove test doesn’t pass as clean as the first bearish challenge. Business is starting to slow these days, and Roku’s guidance this summer was problematic. The $700 million that it’s modeling for revenue is an 8% sequential decline and a modest 3% year-over-year increase. There are growing pains here, and investors will have fresh data when Roku reports later this month.

However, let’s not assume that Roku will be a casualty of marketers paring back on what they’re willing to spend on their missives in an economic downturn. If there’s less money to go around, won’t people spend more time entertaining themselves at home on the cheap? Isn’t this the bullish counter to last year’s bearish thesis about everyone spending more time and money outside of the home? Advertisers trying to reach an audience should value Roku highly in that gloomy scenario, and there’s more to this than just that.

Most of Roku’s ad revenue comes from streaming services trying to stand out among the thousands of apps available on Roku. A soft economy will make second-tier services hungrier to stand out just to survive. Roku should hold up just fine in that scenario.

Roku has a strong balance sheet with nearly three times the cash and short-term investment as the total debt on its books. It’s a good place to be, competitively speaking, with rates rising. The stock now trades at an enterprise value that is just 2.4 times its trailing revenue. An earnings multiple is fruitless at this point, but it has never been cheaper in terms of a top-line-based valuation.

Investors aren’t impressed by the company that created the original operating system that served as a springboard for all streaming video stocks. Those who plant the flag don’t always win in the long run, but Roku is still gaining ground in a market that will only continue to gain traction in the coming year. Considering a purchase of Roku could be one of the smartest things you do in this market as long as the out-of-favor stock lives up to its growth potential.