Stocks got off to a sluggish start in a week with tons of economic reports and key earnings reports. The indices were rather wishy-washy in the morning, but found some buying in the afternoon and all four would end up higher on the day.

The Russell spent the least amount of time in negative territory on Monday and would up with the best gain at 0.33%. The Dow and S&P posted matching gains of 0.24% and the Nasdaq inched up 0.03%.

Seven of the 10 main sectors managed to move higher on the day, but one sector really stood out—energy. The sector jumped 2.47% on the day and that was the only gain over 1.0%. The materials sector moved up 0.84% and the consumer discretionary sector rallied 0.74%.

The healthcare sector was the worst performer with a drop of 0.65% and the industrial sector and tech sector posted matching 0.05% losses.

My scans snapped a six-day positive streak on Monday with four bullish signals and 25 bearish signals.

The barometer dropped sharply after the negative result was added in to the equation, falling to 8.6 from 46.1.

There weren’t any bullish setups that I liked on last night’s signals, so I finally have a bearish trade idea for you today. Medical Properties Trust (NYSE: MPW) appeared on the bearish list, but its fundamental ratings are actually pretty good. The EPS rating is 61 and the SMR rating is an A. The chart was the main driver behind this idea. 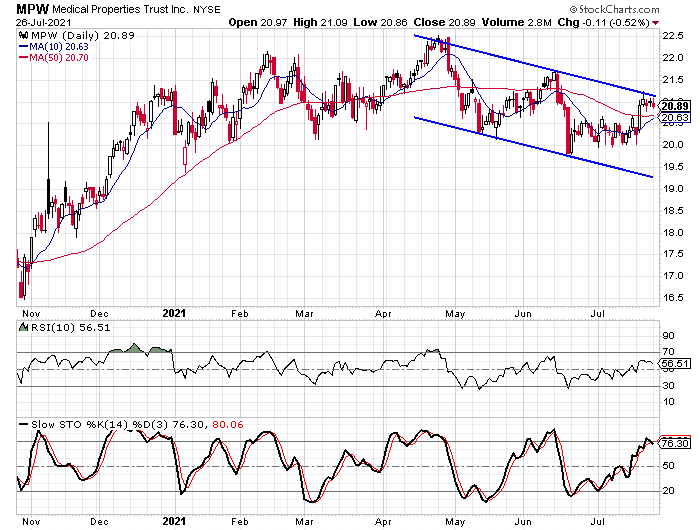 We see how the stock peaked in April and a downwardly-sloped trend channel has formed since then. The stock just hit the upper rail area and it is overbought based on the stochastic indicators. The indicators did make a bearish crossover last night. In the last few instances where they have been above 80 and made a bearish cross, the stock dropped rather abruptly. Those instances also helped form the upper rail.