The experts were wrong because the bulls bought the mini dip, and we are now inches from new high. This is in spite of Covid-19 infection rates being four times bigger now than in June. The risk of reinstating mandates is high. In fact, I thought they would have done it already.

PENN stock fell to November levels on Monday. But it quickly rallied 15% from that low. The problem with this is that it hasn’t yet stabilized. Its business depends on crowds and sports, the more the better.

Even as the U.S. vaccination process went well, the stock continued to fall. It is down 50% from its highs, but maybe the rally was too crazy. The rise wasn’t as steep as that of GameStop (NYSE:GME), but PENN may have had help from that too.

My long-term prognosis for this company is good. I expect that they will grow the business into a big success.

Meanwhile, there are too many near-term hurdles to go all in. There are extrinsic risks – not only from the virus but from the Federal Reserve. We are expecting them to start telling us about their taper schedule. This is likely to spook investors. Honestly, we could use a bit of a breather, as this rally is too long in the tooth.

Specifically to PENN stock, any setback in the crowds being able to gather will hit it hard. It also needs sports events to continue going back to normal. We are not at pre-pandemic levels yet. A runaway virus will cause a ruckus in it.

Moreover, this time we won’t have the hope of the vaccine. That headline benefit has already hit. In fact, it’s now a detriment because the lockdowns could indicate bad efficacy readings from the experts.

There Are Near-Term Risks 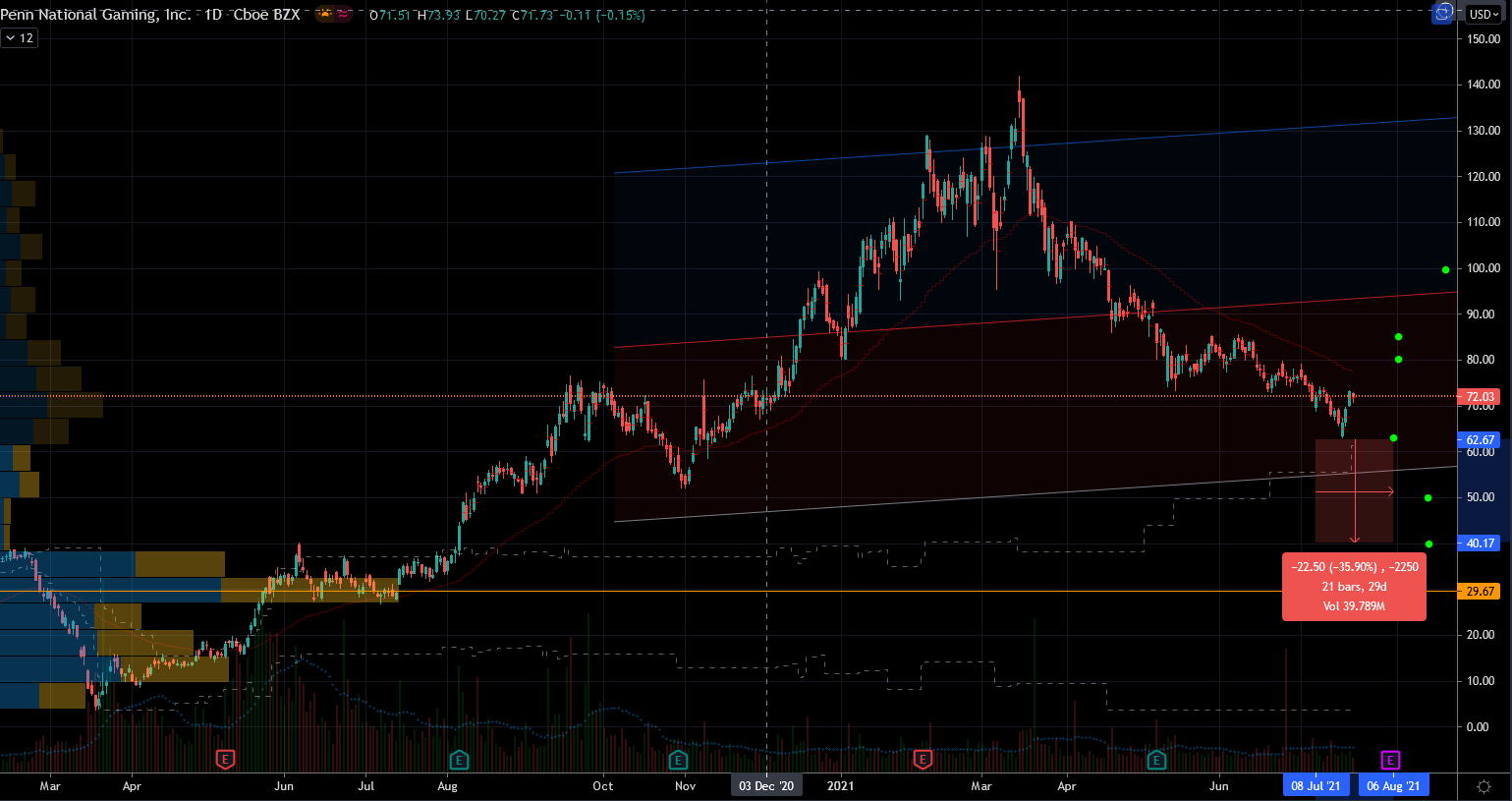 I have not changed my mind on it, I am bullish PENN stock long term. I’ve made my point several times before. But short term, I have grave concerns about the price action. I understand that a few red ticks won’t matter over the years. But that logic also goes the other way. I should not fret missing out on a few green ticks either.

Meaning? Those who are looking for new positions have time to mull it over. In addition, taking small tranche entries is the right thing to do. Active traders also can have fun with it because it moves fast.

Conviction should be medium at best because of all the variables that are in the current macroeconomic setting. We have massive artificial tailwinds that are on schedule to abate. The Fed’s next move is to taper and eventually sell assets and raise rates. The White House is likely on its last stimulus package as well. Equities will feel the void from those extra horses pulling the cart.

We have not had a sustainable correction in a long while. If one comes now it shouldn’t shock investors, but it will. The masses are acting completely oblivious to the risks that are here. The buy-the-dip meme has morphed into a ‘stocks only go up’ strategy. Of course that is not true and eventually we will re-learn that lesson the hard way. Don’t confuse my caution with pessimism. I will buy the dip, the real dip when it comes.

Meanwhile, I can trade around the price action in PENN stock and others. In this case, PENN has support at $62.75 but if it fails then it could revert to last August’s base. I know this sounds crazy but that’s the technical consequence of failure. There are more support zones near $50 per share, so it won’t be straight down. Conversely, the buyers need to overcome the hurdles near $80 and $86 per share. Then PENN stock could try to shoot for the century mark once more.