Stocks ended the week on a strong positive note on Friday with all four indices moving up by more than 1.0%. The Dow and S&P were both in positive territory all day long while the Nasdaq and the Russell each had brief periods where they dropped in to negative territory.

Nine of the 10 sectors gained ground on the day with the communication services sector dropping 1.09% as the only one that lost ground. The second worst performance was the utilities sector with a gain of 0.33%. The only other sector that failed to gain at least 1.0% was the consumer discretionary sector and it gained 0.83%.

The tech sector jumped 2.54% to lead the gains and there was a tie for second place. Both the materials sector and the energy sector gained 2.48% on Friday.

My scans continued to turn more positive with 104 bullish signals and only five bearish signals on Friday.

The barometer jumped to 52.6 from 17.9 once these results were added on to the calculation. 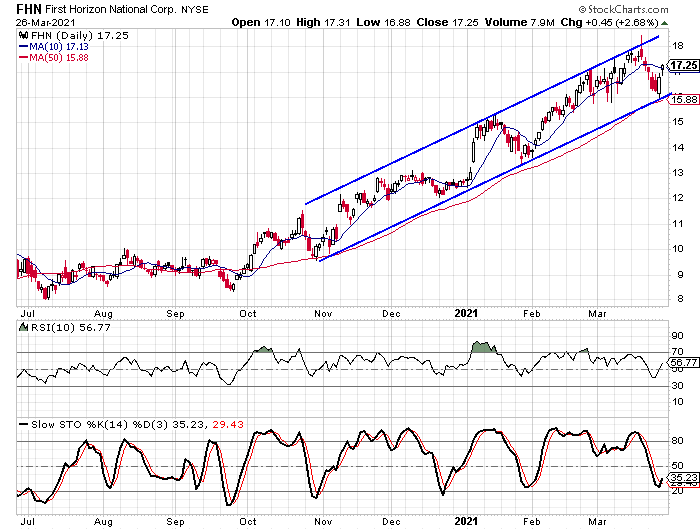 We see on the chart how a trend channel has formed over the last five months and the stock just hit the lower rail of the channel. The stochastic indicators reached a similar level at they did in late January and they made a bullish crossover on Friday. The move from the end of January through late February saw the stock rally over 28%.