Monday created some strange results for the indices and the sectors. When futures opened on Sunday night, S&P contracts opened higher around 1.5%.

When Pfizer announced that it had seen successful results from its virus vaccine, markets around the world jumped sharply. By the time the stock market opened, S&P futures were up 4.5% and Russell futures were up 7.0%.

The gains carried over to the cash market and we saw huge gains out of three of the indices. The Nasdaq was higher, but not by nearly as much as the others. By the end of the day, the gains would slip a little and the Nasdaq would move in to the red.

The sector results were mixed with six moving higher and four moving lower, but it was the two biggest gainers that really stood out. The energy sector jumped an incredible 14.28% as oil jumped 7.67%.

Under ordinary circumstances the gain by the financial sector would have been jaw dropping, but the gain of 8.33% was only good enough for second place on Monday.

As for the worst performing sectors, the communication services sector fell 0.85% and the tech sector dropped 0.72%.

My scans continued to move toward a more negative posture with 61 bearish signals and three bullish signals. There were a number of bond ETFs on the bearish list, but those are not included in the count above or in the calculation of the barometer.

The barometer fell to -32 from -7.3 once these results were added in to the equation.

Many of the big moves we saw yesterday were irrational in my opinion. A successful vaccine is certainly good news, but it isn’t going to get the global economy turned around tomorrow. With so few choices on the bullish list and some really odd looking charts on the bearish list, I chose a bearish trade idea for today. The KraneShares CSI China Internet ETF (AMEX: KWEB) was on the bearish list and had a bearish pattern on its chart. 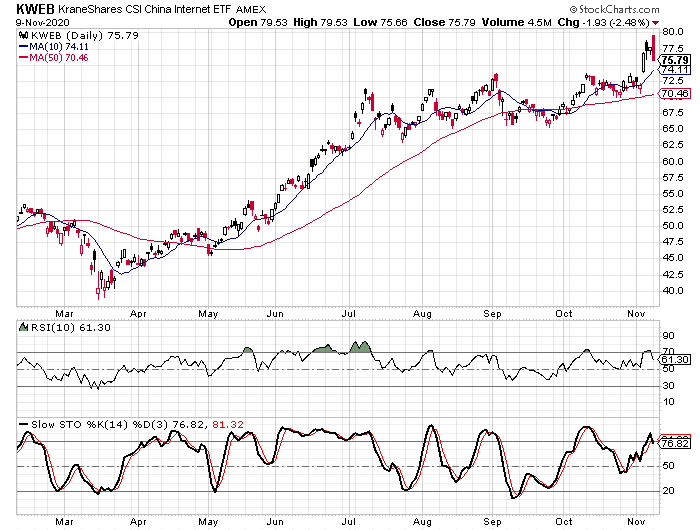 What we see on the chart is a bearish engulfing pattern. The fund opened significantly higher as the global rally started, but it fell throughout the day and finished the day down 2.48%. The open was above the highest price from Friday and the close was lower than the lowest price on Friday. The body from Monday’s action engulfs the previous day’s body and in a bearish fashion.

5G Stock CRUSHES Earnings!! [sponsor]
Wall Street is loading up on shares of one 5G SuperStock (with more than $2 billion invested!). Why? Because the stock brings in more cash than IBM, Facebook and even Google! Yet it trades for just under $5. Get the scoop on the 5G SuperStock right here.