Stocks rallied sharply on Friday and that allowed one of the indices to finish with a weekly gain. The Nasdaq 2.29% on the day and that put it at a 1.11% gain for the week. The other three gained ground on Friday, but not enough to erase the gains from earlier in the week.

Nine of the 10 main sectors gained ground on Friday with only the energy sector finishing in the red with a loss of 0.07%.

Energy stocks got hit hard last week as the Energy Select Sector SPDR fell over 8% on the week.

The utilities sector jumped 1.64% and the healthcare sector was up 1.61%. In all there were seven sectors that gained over 1.0% on the day.

My scans turned extremely bullish on Friday with 189 bullish signals and only five bearish signals.

The barometer jumped to 89.8 from 24.7 once these results were added in and that is the highest reading since June 30.

With so many stocks and funds on the bullish list, there were a number of setups to choose from. However, with the S&P’s 10-day moving average making a bearish crossover below its 50-day moving average, I think some caution is still warranted. Today’s trade idea is a bullish one, but I thought it would be a better move to select an ETF rather than an individual stock. The fund I chose is the Industrial Select Sector SPDR (NYSE: XLI). 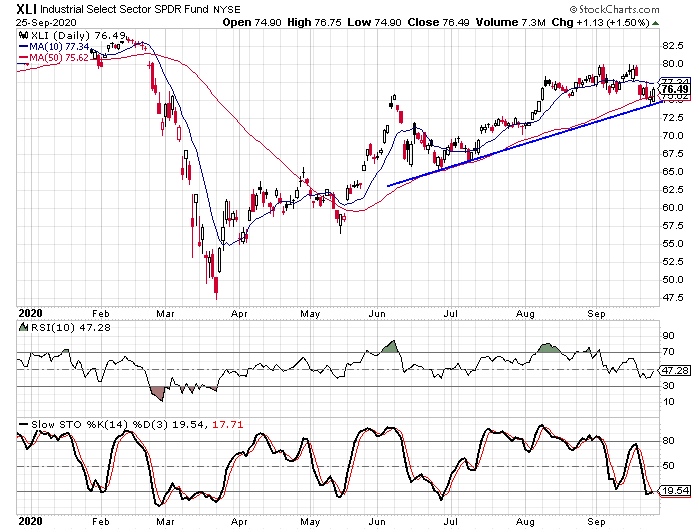 We see on the chart that there is a trend line that connects the lows from June and July and the low from last week just touched that trend line. The daily stochastic indicators are just in oversold territory and made a bullish crossover on Friday. The last time the indicators did that was in late June and the fund went on to gain approximately 17% in the next five or six weeks.

Buy to open the November 75-strike calls on XLI at $4.65 or better. These options expire on November 20. I suggest a target gain of 100% and that means the fund will need to reach $84.30. That is slightly above the February high, but certainly reachable. I recommend a stop at $73.50.