When the market opened on Thursday it looked like the selling from Wednesday was going to carry over, but indices reversed higher after opening with losses. The end of the day gains weren’t nearly as good as the midday gains, but all four finished in the black.

There were eight sectors that moved higher on the day while two fell.

The healthcare sector was the worst performer with a decline of 0.53% and the consumer discretionary sector fell 0.04%. Those were the only two to finish in the red.

Even though the market moved higher, the sectors that led the way were more defensive in nature.

The utilities sector gained 1.16% to lead the way and it was followed by the consumer staples sector with a gain of 0.74%.

My scans turned even more positive last night with 46 bullish signals and seven bearish signals. The barometer jumped from 8.9 to 24.7 after these results were added in to the equation.

Even though there were a considerable number of stocks on the bullish list, there weren’t an abundance of stocks that I liked the whole picture on. But there weren’t any stocks on the bearish list that I liked for a move lower, so we have a little bit of a different trade idea today. The stock is Eaton Corp. (NYSE: ETN) and it was on the bullish list. The difference is the fundamental ratings are about as neutral as you can get. The EPS rating is 49 and the SMR rating is a C. 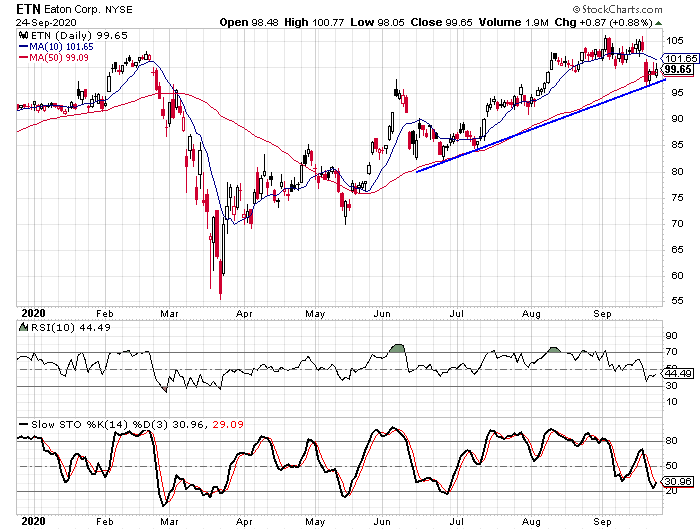 While the fundamentals aren’t all that great, I liked the chart and how the stock is hovering right around its 50-day moving average. There is also a trend line that connects the lows from June, July and the lows from earlier this week. I look for the stock to make another bounce in the next month or so, similar to the one from early July to early August.

Buy to open the November 95-strike calls on ETN at $8.40 or better. These options expire on November 20. I suggest a target gain of 75% and that means the stock will need to reach $109.70. That level is slightly above the highs from earlier this month, but it isn’t a huge percentage gain. I recommend a stop at $96.