The selling that hit the market after the Fed announcement on Wednesday carried over in to Tuesday. All four of the main indices were down on the day and none of them ever saw positive figures.

Seven of the 10 main sectors lost ground on the day with the communication services sector falling 1.84% as the biggest decline.

The consumer discretionary sector fell 1.41% and the financial sector dropped 1.04% to give us three sectors with losses greater than 1.0%.

My scans snapped the six-day string of positive readings with 49 bearish signals and eight bullish signals.

The barometer dropped sharply once these results were added in, falling from 43.7 to 5.6.

I have a second straight bearish trade idea for you today. The Children’s Place (Nasdaq: PLCE) appeared on the bearish list last night and the company’s fundamental ratings aren’t very good. The EPS rating is a 14 and the SMR rating is average at C. 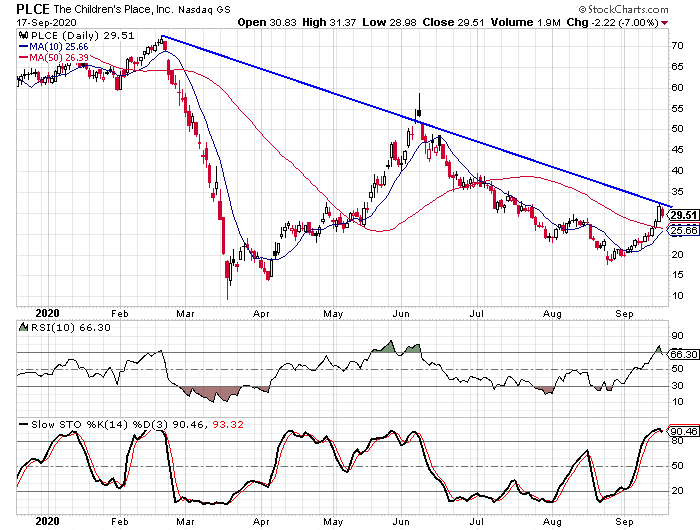 The chart shows how the stock has fallen over the last eight months, but a recent rally has caused the stock to enter overbought territory on both the RSI and the stochastic indicators. The last time they were both in overbought territory was in early June, just before the stock fell almost 70%. We also see if we connect the high from February and the reversal point in June with one line, the line hits the current high.