It was interesting ride for stocks on Wednesday. All four of the main indices opened higher, but the Nasdaq and the Russell turned lower in the morning and dipped in to negative territory ahead of the Fed’s rate decision and press conference at 2:00. The Fed changed a few statements and suggested that interest rates would be kept low until 2023. Stocks rallied after those statements, but they fell heading in to the close and two of the four ended up with losses on the day.

Six of the 10 main sectors fell on the day with the tech sector falling 1.56% as the worst performer. The communication services sector dropped 1.13% and those were the only two that declined more than 1.0%.

The energy sector blew the others away for the top performance. The sector gained 4.01% on the day as oil jumped almost 5% on the day.

The financial sector rose 1.13% and the industrial sector moved up 1.02% to give us three sectors with gains over 1.0%.

My scans remained bullish for a sixth straight night, but the difference between the two lists shrank again last night.

There were 29 bullish signals and 14 bearish signals last night and that is the smallest difference of this stretch.

The barometer fell slightly once again, dropping to 43.7 from 60.5.

With enough bearish signals to actually have a few choices, the stretch of bullish trade ideas will end at six. Today’s trade idea is a bearish one on Capri Holdings (NYSE: CPRI). The company’s fundamental ratings are poor with an EPS rating of 16 and an SMR rating of a C. 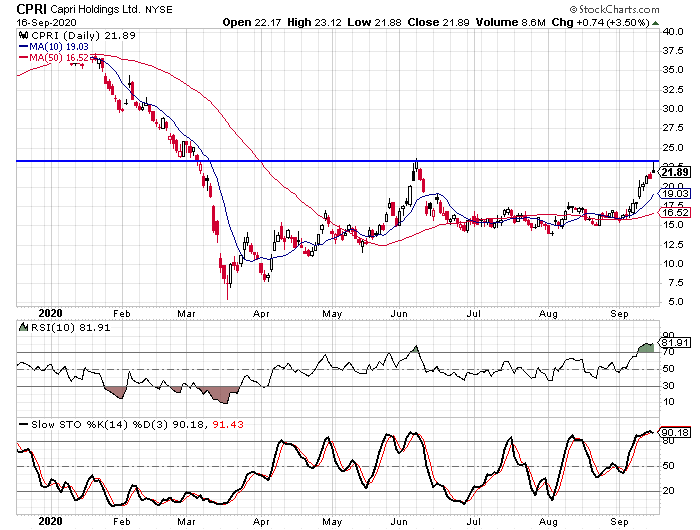 Three things on the chart jumped out at me. First, the stock had trouble in the $23 to $23.50 area back in June and it peaked at $23.12 yesterday. The second thing that stood out was yesterday’s pattern. In Candlestick vernacular that is a shooting star pattern and it is a bearish signal. Lastly, the RSI and the stochastics were both in overbought territory and the last time that happened was at the peak in June—just before the stock dropped sharply.