The gains from Wednesday didn’t carry over to Thursday as stocks dropped once again. This makes four declines in the last five days for the main indices and it has all four flirting with their 50-day moving averages.

All 10 sectors fell on the day and all but one of them lost at least 1.0%. The only sector that didn’t exceed that level of loss was the materials sector which fell 0.94%.

The worst performer on the day was the energy sector which dropped 3.67%. The tech sector declined 2.26% and those were the only two sectors that lost over 2.0%.

The barometer continued to climb and the final reading was 18.7, up from 9.0 on Wednesday night. Believe it or not, that is the highest reading for the indicator since July 2.

With only five stocks to choose from on the bearish list there weren’t any setups that I liked there. So instead we have a third straight bullish trade idea. BJ’s Wholesale Club (NYSE: BJ) was on the bullish list and the company scores a 99 on the EPS rating scale. The company didn’t have an SMR rating because it doesn’t have a calculable ROE. I checked three different sites and couldn’t find one anywhere. I can tell you that sales increased by 18% during the most recent quarter and that’s a good thing. 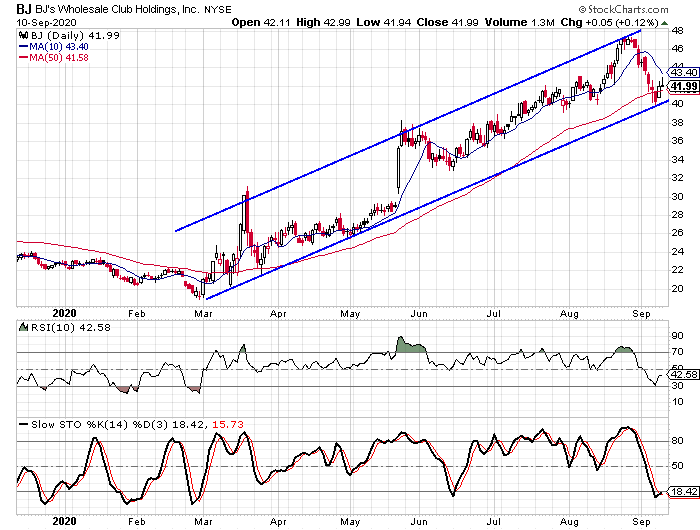 The chart for BJ’s is what really got my attention in the first place as the channel was apparent before I even drew it. Sometimes I think I see a channel and then when I draw it, it isn’t as clear as I thought. But that wasn’t the case here. We see the lower rail connecting lows from March, April, May, and now September. We also see that the stochastic indicators are in oversold territory since June and they made a bullish crossover last night.

Buy to open the November 40-strike calls on BJ at $5.40 or better. These options expire on November 20. I suggest a target gain of 75% and that means the stock will need to reach $49.45. That target price is $2 higher than the stock reached in August, but the upper rail of the channel should be above that level in the next few weeks.