Stocks ended their three-day losing streak on Wednesday and they did it in a big way. All four of the main indices saw big gains with all of them gaining over 1.0% on the day. The Nasdaq led the way with a gain of 2.71% and the S&P jumped 2.01%.

The only other sector that gained over 2.0% was the materials sector with a move of 2.58%.

The only sector that failed to gain at least 1.0% was the energy sector which gained 0.68%. The second smallest gain was 1.01% and that was the financial sector.

My scans turned in their first positive result since August 26 last night. There were 40 bullish signals and only two bearish signals.

The barometer moved in to positive territory once these results were added in and that is that snapped a streak of eight straight negative readings. The final reading last night was 9.0, up from -13.3.

I have a second straight bullish trade idea for you today and the subject company is DR Horton (NYSE: DHI). Homebuilders have been some of the best performers over the last six months and DR Horton in one of the tops when it comes to the fundamental ratings. The EPS rating is a 99 and the SMR rating is an A. Those are the best ratings a company can get. 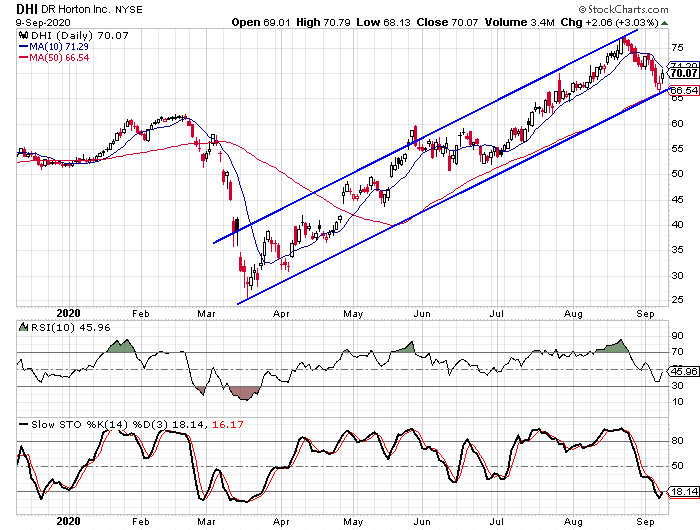 We see on the daily chart that the stock has been trending higher since March and a trend channel has formed that defines the various cycles within the overall trend. The lower rail of the channel is right on top of the 50-day moving average and that gives the stock two layers of support.

Buy to open the November 67.50-strike calls on DHI at $7.80 or better. These options expire on November 20. I suggest a target gain of 75% and that means the stock will need to reach $81.15. This target is above the high in August, but based on the big gains from March through mid-May and from the end of June through mid-August I think it is a reasonable target. I recommend a stop at $66.00.