After posting gains in each of the first four days of last week, stocks saw some selling pressure on Friday. All four of the indices saw significant losses as a result of the selling.

The Nasdaq and S&P each dropped 0.54% and those were the two best performances. The Dow dropped 0.94% and the Russell fell 1.23% as the worst performer.

Nine of the 10 sectors lost ground on the day with the consumer staples sector notching a gain of 0.12% as the lone one in the black.

The materials sector dropped 1.43% and that was the worst performance by far.

The tech sector dropped 0.91% as the second worst performer.

My scans turned negative on Friday with 31 names on the bearish list and only three on the bullish list.

The barometer dropped sharply as a result of the signals.

The indicator fell from 27.2 to 5.6 once these results were added in to the equation.

Today’s trade idea is a bearish one and it is on a name I have suggested at least three times before. The company is American Airlines (Nasdaq: AAL) and it was on the bearish list again on Friday. The company’s fundamentals are actually slightly above average with an EPS rating of 67 and a B on the SMR rating scale. 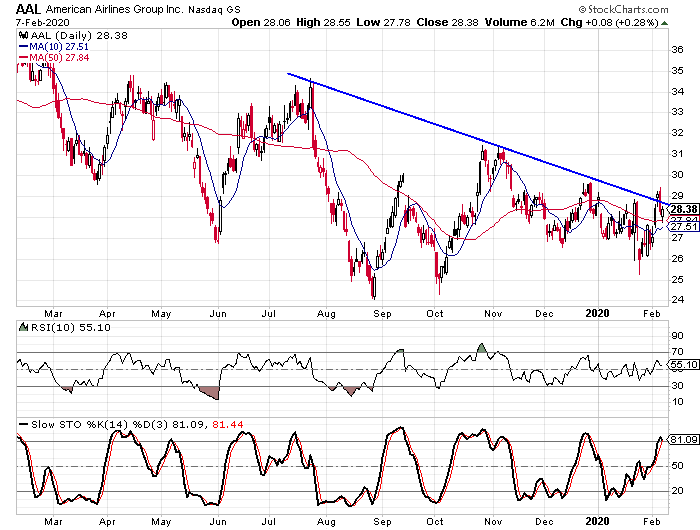 We see on the daily chart how the stock has been trending lower and we see that when the stochastic indicators have reached overbought territory and then turned lower, it has been a pretty good bearish signal. The indicators made a bearish crossover on Friday.