Stocks rallied from significant losses on Thursday as all four indices opened lower. Three of the four indices rallied enough to finish in the black while the Dow trimmed a near 200 point loss at its low it still closed down 0.09%.

The sectors were mixed on the day with six moving lower and four moving higher.

The industrial sector gained 1.08% to lead the way and it was followed by the utilities sector which tacked on 0.89%.

My scans remained negative, but the difference between the two lists dropped dramatically.

There were 27 names on the bearish list and 23 names on the bullish side. The net difference of 4 was the smallest reading since the negative streak started seven trading days ago.

The barometer edged up a little as the difference got smaller. The final reading on Thursday was -38.2 and that was up from the -54 reading the day before.

Last night’s scans were a little odd as there were more fundamentally strong companies on the bearish list than the bullish list and vice versa. Despite that oddity, the trade idea I have for you today is a bullish one. Commercial Metals (NYSE: CMC) appeared on the bullish list and the fundamentals are pretty solid. The company’s EPS rating is a 96 and the SMR rating is a B. 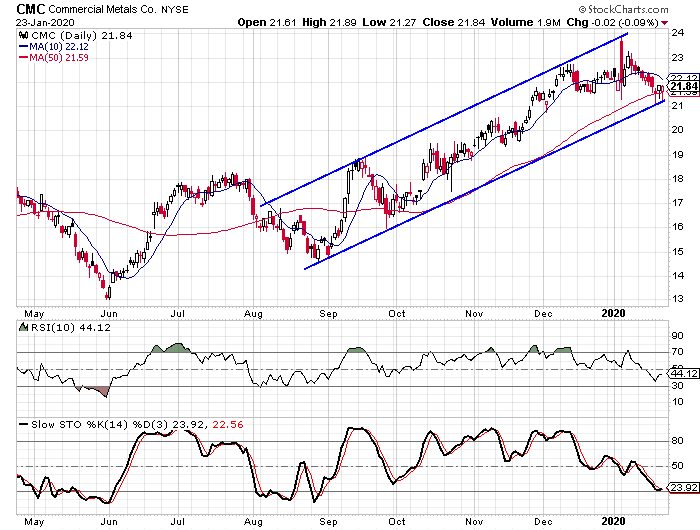 We see on the daily chart how the stock has been moving higher since the end of August and a trend channel has formed that defines the various cycles within the overall trend. The stock just hit the lower rail of the channel and seems to be finding support at its 50-day moving average. We also see that the stochastic readings reached their lowest level since late September and made a bullish crossover last night.