The Dow finished with a gain of 0.28% and that was the second best performance of the bunch. The S&P moved up 0.03% on the day while the Nasdaq was the only index that didn’t make it back to positive territory and finished with a loss of 0.04%.

Seven of the 10 sectors moved higher on the day with the energy sector leading the way with a gain of 1.18%.

The consumer staples sector fell 0.64% and that was the worst performance on the day.

The tech sector dropped 0.51% and the consumer discretionary sector lost 0.40% as the third one to lose ground.

My scans turned a little more negative last night with 59 names on the bearish list and seven on the bullish list.

This is the biggest negative reading in this stretch of seven straight days of bearish results.

The barometer dropped from -24.3 to -35.6 once these results were added in to the equation.

I hate to make yet another bearish trade suggestion, but those are the readings I keep getting. Today’s trade idea makes the fifth bearish idea out of the last six and it is yet another one on an energy company. Today it is Apache (NYSE: APA) that is the subject company and it scores a 7 on the EPS rating and a C on the SMR rating. 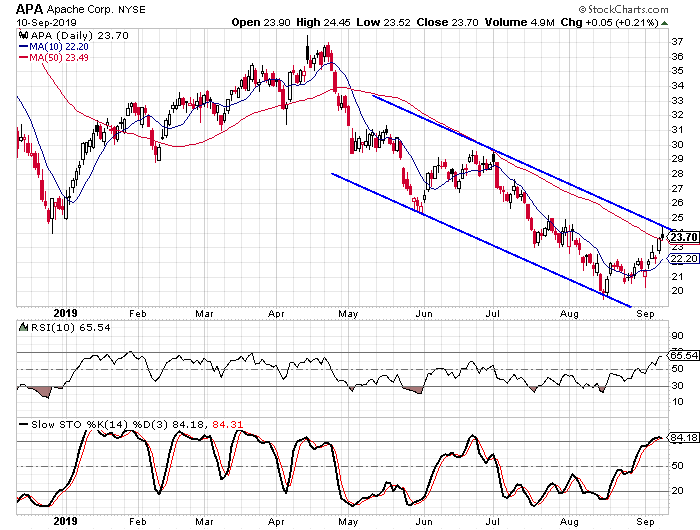 The daily chart shows a downward sloped trend channel forming over the last four months and the stock just hit the upper rail of the channel. The upper rail is just above the 50-day moving average. The daily stochastic readings are in overbought territory and just made a bearish crossover last night.