After snapping a winning streak on Tuesday, buyers reentered the market on Wednesday and all four indices moved higher. The gains varied greatly however. The Russell led the way with a gain of 1.40% while the Nasdaq was up 0.69% to finish second. The S&P added on 0.35%, but the Dow only managed to gain 0.03%.

Seven of the 10 main sectors moved higher on Wednesday with the tech sector leading the way with a gain of 0.70%. The consumer discretionary sector was up 0.48% and that was good enough for second while the communication services sector tacked on 0.43% for the third best gain.

[hana-code-insert name=’adsense-article’ /]The utilities sector finished as the worst performer with a loss of 0.31% and it was joined in negative territory by the materials sector (-0.05%) and the industrial sector (-0.03%).

The Dow and the industrial sector were hurt by Boeing once again.

The scans were still negative again last night, but the difference wasn’t nearly as negative as they were on Tuesday.

The barometer didn’t change much once these results were added in, moving up to -51.5 from -54.2.

After a couple of bearish ideas over the last few days, I have a bullish trade idea for you today. Ciena (NYSE: CIEN) appeared on the bullish list Wednesday night and the company has mixed fundamental readings. The EPS rating is a 96 and that is really good, but the SMR rating is average at a C. 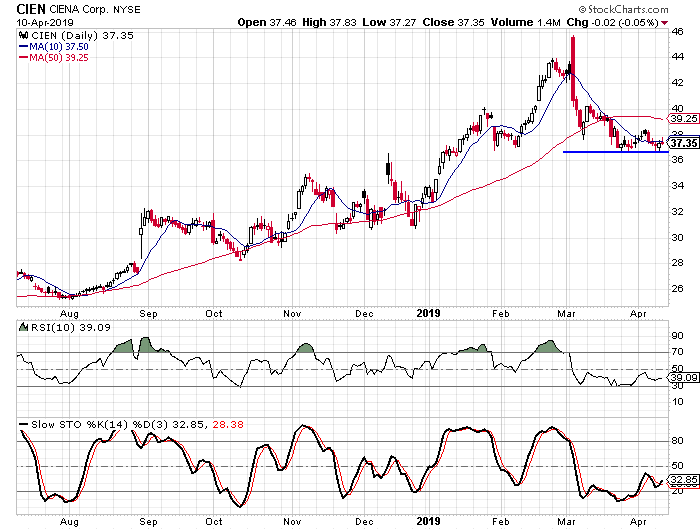 We see on the chart that the stock has formed a double-bottom pattern in the $36.75 area and looks like it is ready to bounce now. For the pattern to be confirmed the stock will need to move above the high between the two lows and that would mean moving above $38.40 and continuing to rally.