The market went for a wild ride on Wednesday with stocks lower in the morning, then jumping after the Fed meeting, and then falling once again. The Fed indicated that it will not hike again in 2019 and that was initially taken as good news and stocks jumped sharply. Unfortunately the gains didn’t hold as I think investors reevaluated what the stance meant for the economy.

At the end of the day, three of the four indices ended up in the red with the Russell suffering the worst loss at 0.76%. The Dow was the second worst performer with a loss of 0.55%. The S&P declined a modest 0.29% and the Nasdaq was the lone index on the plus side with a gain of 0.07%.

The financial sector suffered the biggest hit at –2.06%.

With the Fed becoming more dovish, that will tighten the spread between the rate banks charge on loans versus the rate they pay on deposits.

On the positive side, the communication services sector led the way with a gain of 0.90%.

Oil jumped sharply after inventories dropped far more sharply than expected and that led to the energy sector gaining 0.88% as the second best performer.

My scans turned more bearish last night with 82 names on that side of the lists and only 13 on the bullish side.

The barometer dropped to a reading of -48 once these results were added in to the equation.

The fact that the market lost the upward momentum it had after the Fed announcement makes me think the market may move lower for the next few days. With that in mind and the barometer falling, today’s trade is another bearish one. This time the company is Vodafone Group (Nasdaq: VOD). The company’s fundamentals aren’t very good with an EPS rating of 20 and an SMR rating of a C. 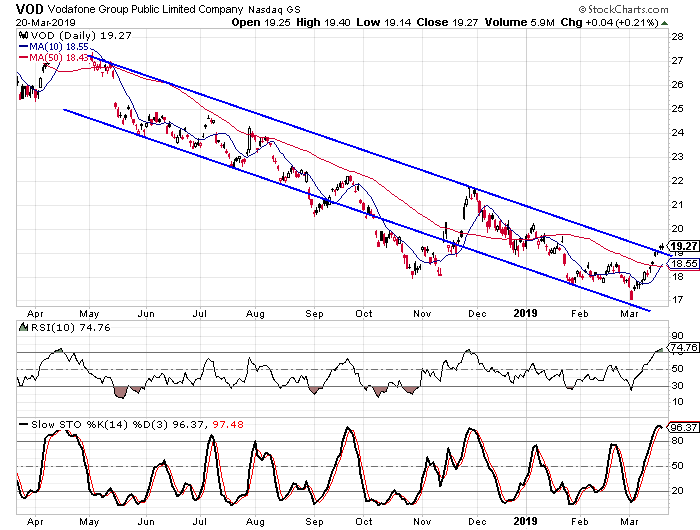 We see on the chart how the stock has been trending lower since last spring. The various cycles within the overall trend have formed a trend channel and the stock is actually above the upper rail right now. The daily stochastic readings are extremely high like they were in September and November. In each of those cases the stock fell sharply after the stochastics made a bearish crossover.