Friday saw the four indices all lose ground again and that made it a clean sweep on the week with all four indices falling every day last week. Listening to Bloomberg Friday afternoon, they said it was the first time since November 2016 we have seen the S&P lose ground for all five days of a given week. At least I’m pretty sure that’s what I heard.

As for the performances, the S&P suffered the worst loss at 0.21% and it was followed by the Nasdaq with a loss of 0.18%. The Russell fell 0.11% and the Dow had the smallest loss at 0.09%. All four of the indices were down far more sharply in the morning and then rallied back in the afternoon.

The financial sector was the one that was unchanged.

The energy sector was by far the worst performer with a loss of 1.87%.

The next worst performance was -0.70% by the consumer discretionary sector.

The utilities sector was the leader once again and this time it tacked on 0.35%.

My scans finally snapped their string of negative readings on Friday. The final results showed 32 names on the bullish list and 14 names on the bearish side.

The barometer jumped from -16.9 to -2.9 once these results were added in to the equation.

With the selection of bullish stocks being greater than the bearish ones, I have a bullish trade idea for you today and it is on Salesforce.com (NYSE: CRM). The company scores a 96 on the EPS rating system and it gets an A on the SMR rating. 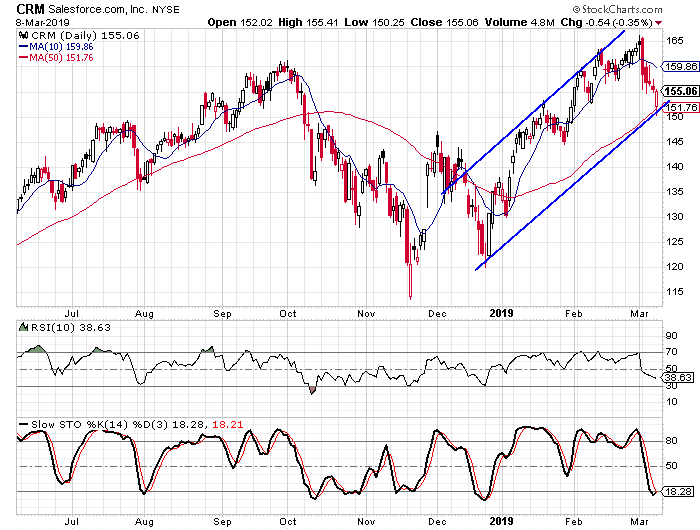 We see on the chart how Salesforce has moved higher since the December low and we could be looking at a trend channel forming. I drew the upper rail connecting the highs and then drew a parallel lower rail and this is what it looked like. Being that this would be the first test of the lower rail, it is hard to call it a channel yet. We see that the stochastic readings were in oversold territory and made a bullish crossover on Friday.