Stocks jumped on Tuesday after Congress announced there was a deal in place that would avoid another government shutdown. The indices gapped higher and continued to move higher throughout the day. The gains were pretty even across the board, but the Dow led the way with a gain of 1.49%.

[hana-code-insert name=’adsense-article’ /]All 10 sectors moved up on the day, but the materials sector had the best gain at 2.24%.

Industrials experienced the second best gain at 1.55% and it was followed closely by the consumer discretionary sector with a gain of 1.54%.

There were eight sectors that finished with gains over one percent.

The only two sectors that didn’t gain over one percent were utilities (0.23%) and consumer staples (0.78%).

My scans came in with a positive reading last night and that ended a streak of 23 straight days of negative readings.

Today’s trade idea is a bullish one on Amgen (Nasdaq: AMGN). The biotech company scores an 82 on the EPS rating and an A in the SMR category. The company sports a return on equity of 50.7% and a profit margin of 49.4%. 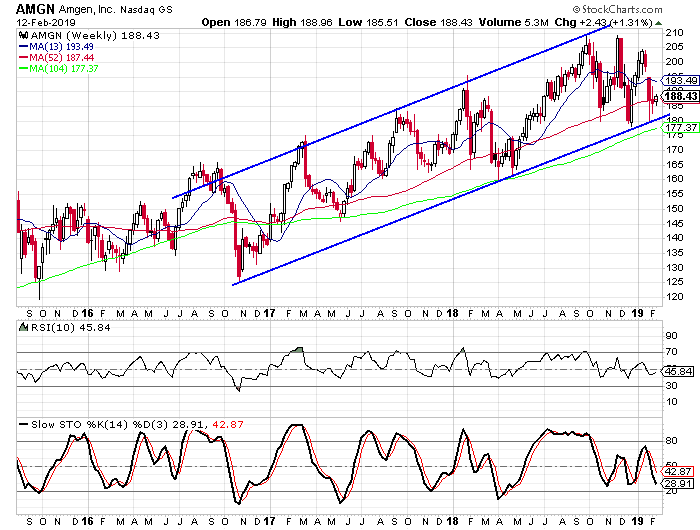 Like we saw with CME Group the day before, the bullish signal on Amgen came from daily indicators, but it was the weekly chart that got my attention. We see how the stock has trended higher over the last few years and a trend channel has formed. The stock just bounced off of the lower rail of the channel.