Wednesday brought about another day of gains for the main indices and that makes it four days in a row that all four have moved higher. It wasn’t as cut and dry as the prior two days as stocks limped in to the close.

[hana-code-insert name=’adsense-article’ /]As with the indices, it wasn’t as cut and dry for the sectors on Wednesday as it was on Tuesday.

These were the only two sectors to log gains over 1%.

On the down side, the defensive sectors were the worst performers with consumer staples losing 0.97% and utilities losing 0.62%.

The materials sector was the third one in negative territory with a more modest loss of 0.02%.

The scans snapped their string of three straight positive readings with 14 names on the bearish list and one on the bullish list. This caused the barometer to drop from 13.4 to 5.0.

The rally that has taken place over the last few weeks looks as though it may be running out of gas and I have given readers three straight bullish trade ideas, so I wanted to get a bearish idea out today. That and there were more stocks to choose from on the bearish list. Pivotal Software (NYSE: PVTL) appeared on the bearish list last night and its fundamentals are pretty weak. The EPS rating is a 41 and the SMR rating is a D. 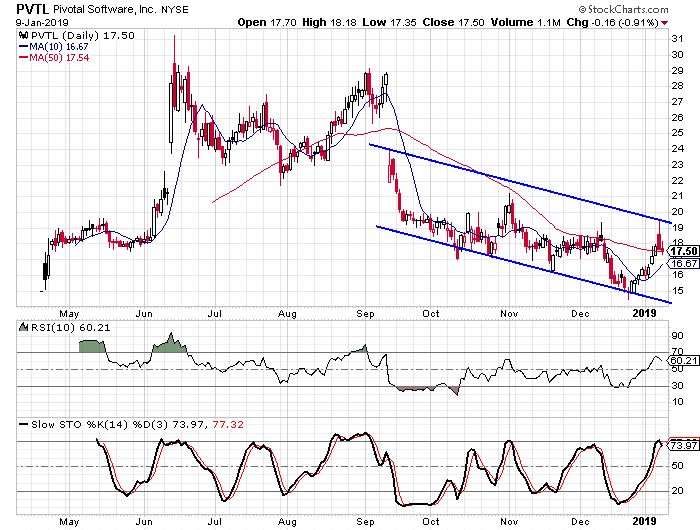 The stock has been trending lower after gapping lower in September. The trend channel I drew is a little different in that I drew the lower rail first to connect the lows in late October, mid-November, and mid-December. The upper rail was drawn as a parallel line and it very neatly connected the post gap high and the high on Tuesday. I look for the stock to move lower again in the coming weeks.