Stocks got clobbered yesterday with the worst losses since the February rout. All four indices were down and all of them got hit hard. The Nasdaq got hit the hardest with a loss of 4.08% and it was followed by the S&P with a loss of 3.29%. The Dow lost 3.15% while the Russell got hit the least but still lost 2.86%.

The tech sector took it on the chin once again with a loss of 4.79%.

The energy sector lost 3.51% as the second worst performer.

The consumer discretionary lost 3.37% and the industrial sector lost 3.3% and they were the only other ones to lose over three percent.

My scans were surprisingly balanced last night with 12 names on the bullish list and 13 on the bearish list.

The fact that they scans were balanced is a reflection on how oversold stocks have become based on their daily indicators.

The barometer did slip a little, from 23 to 17. If stocks see a modest gain today or tomorrow, I wouldn’t be surprised to see a huge skew toward the bullish side and that would create a big jump in the barometer.

Looking through the charts and the fundamentals last night was hard. I have made three straight bullish suggestions and then we get hit with a huge selloff. Hopefully some of you read all of yesterday’s trade idea as there was a note about a possible bearish play on Schlumberger that I passed on. After much deliberation, today’s trade idea is a bearish one on Constellation Brands (NYSE: STZ). The company’s fundamentals are fine with an EPS rating of a 77 and an SMR rating of an A. 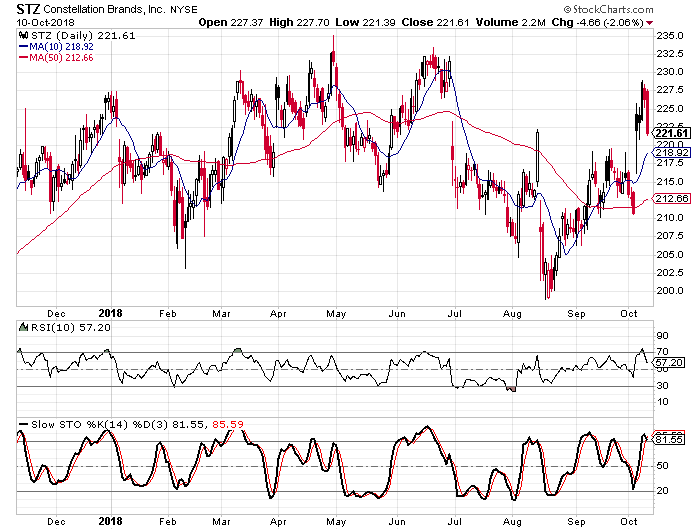 The reason STZ is the subject of today’s bearish trade idea is because it was one of the few on the bearish list that wasn’t in an upward trend. The stock hit a high in May and then dropped and hasn’t been able to get back up to its previous high. It fell short in June and it looks like it will fall short again after yesterday’s drop. We see that the stock was overbought heading in to and the stochastics made a bearish crossover while the RSI dropped sharply. I look for the decline to continue in the coming weeks.