All four of the main indices lost ground on Wednesday and three of the four were in positive territory until the Fed announcement. The Russell was the one index that was in negative territory all day and it finished with the worst loss at 1.03%.

The other three all decent gains heading in to the afternoon, but turned down after the Fed announced the latest rate hike. The Dow lost 0.40%, the S&P lost 0.33%, and the Nasdaq lost 0.21%. The hike was widely expected so the downward move is a little surprising.

The consumer discretionary sector and the healthcare sector tied for the best performance with matching gains of 0.21%.

The consumer staples sector (+0.09%) was the third sector in positive territory.

On the down side, the financial sector lost 1.24% and that was the worst performance of the bunch.

The energy sector lost 1.0% and those were the only two sectors that lost one percent or more.

My scans were decidedly bearish for the third straight night with 43 names on the bearish list and seven on the bullish list. The barometer continued to fall and is currently at -41.8.

For today’s trade idea we are going back to the well on the iShares MSCI Emerging Markets ETF (NYSE: EEM). This will be our third time making a bearish play on the fund in the last few months with the first two being successful trades. 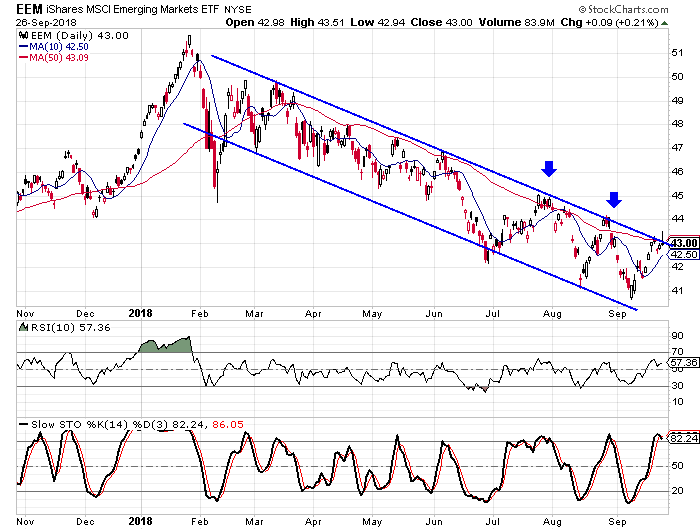 We see the downward-sloped trend channel is coming in to play once again. The two blue arrows mark the dates of the first two trade ideas. This time around we see the stochastic readings are making a bearish crossover just like they did at the end of July and the end of August. There is an additional bearish signal with the current chart and that is a gravestone doji. The fund opened and closed at approximately the same price, but was much higher between the open and close. It is a bearish sign because it shows the upward momentum was unsustainable.

Buy to open the November $44-strike puts on EEM at $1.75 or better. These options expire on November 16. The fund will need to drop to $40.50 for these options to double and that is slightly below the recent low earlier this month. I suggest a target gain of 100% with a stop at $43.60.