For the fourth straight trading session, all four of the main indices moved higher on Tuesday. The Russell led the way yesterday with a gain of 1.15% and it was followed by the Nasdaq with a gain of 0.49%. The Dow gained 0.25% and the S&P trailed the others but still logged a gain of 0.21%.

Looking at the sector returns from yesterday, eight moved higher, one broke even, and two moved lower. The utilities and consumer staples sectors both logged losses of 0.75% as the two sectors that finished in the red.

[hana-code-insert name=’adsense-article’ /]On the plus side, the consumer discretionary sector gained 0.79% to lead the way and it was followed by the industrial sector with a gain of 0.73%.

The healthcare sector was the one that broke even.

My scans turned negative last night for the first time in seven sessions.

Adding these numbers in to the barometer calculation caused it to drop to a reading of 13.4, down from 41.2.

The stock National Oilwell Varco (NYSE NOV) was on the bullish list last night, but doesn’t have great fundamentals. The company doesn’t score very well in IBD’s ratings with a 40 EPS rating and a D on the SMR rating, but the chart was too much to pass up. 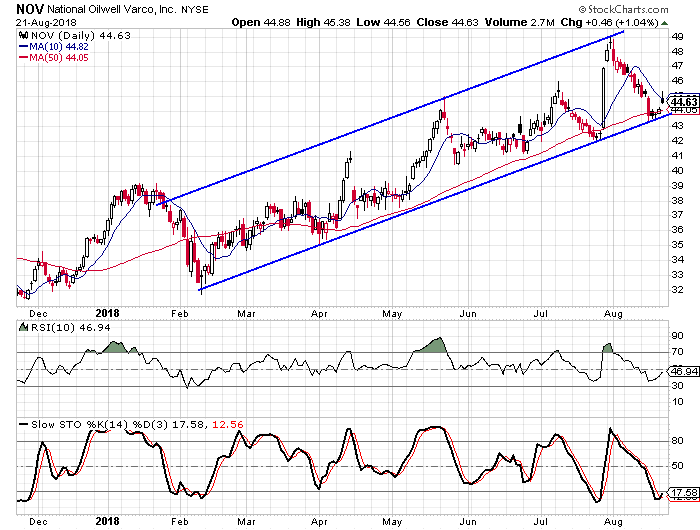 The stock has been in an incredibly tight trend channel over the last seven months. That channel steered the stock to a gain of almost 55% from the low in February to the high earlier this month. The stock just touched the lower rail of the channel and bounced yesterday. We also see that the stochastic readings made a bullish crossover while in oversold territory. The last time it did that, the stock jumped approximately 16% in five days.