All four of the main sectors moved higher again on Monday and once again it was the Dow and the Russell leading the way. The Dow gained 0.35% to nudge out the Russell (+0.34%) for the top spot. The S&P gained 0.24% for the third best performance and once again the Nasdaq lagged the others but still gained 0.06%.

Seven of the ten sectors moved higher on the day with the materials sector leading the way with a gain of 0.70%. The industrial sector and the telecom sector tied for second place with gains of 0.67%.

My scans were interesting last night as the bullish list and the bearish list were both larger than the night before.

There were 52 names on the bullish side and 32 on the bearish side.

I found one stock on each of the list that I liked last night, but after five straight bullish trade ideas I felt a bearish one was in order.

The stock on the bearish list that I liked best was AmerisourceBergen (NYSE ABC). The stock doesn’t have bad fundamentals, but the chart was enticing to me. The EPS rating from IBD is 71 and the SMR rating is a B.

In case you were wondering, Expedia was the stock on the bullish list that caught my eye. But like I said, I felt a bearish trade idea was in order and I liked the option pricing better on ABC. 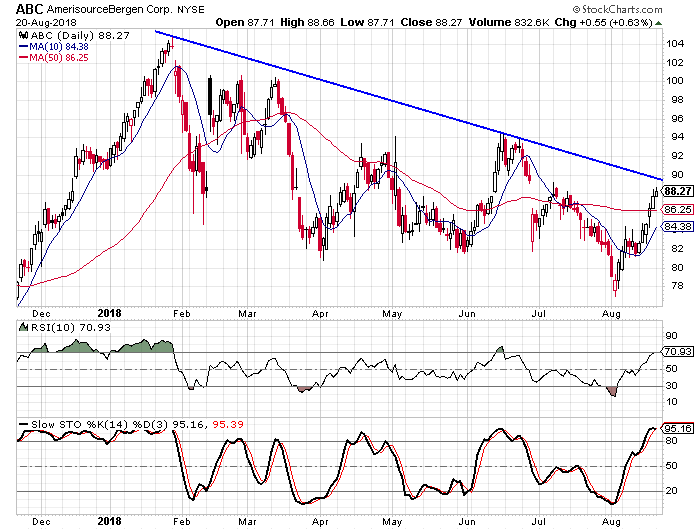 ABC has been trending lower since the January high and the trendline connecting that high with the high from June is just overhead at this point. The RSI and the daily stochastic readings are hitting overbought territory for the first time since that June high and look like they are ready to roll over again.