Three of the four main indices gained ground on Friday with the Dow leading the way with a gain of 0.54%. The S&P was second with a gain of 0.46% while the Nasdaq managed a 0.12% gain. The Russell was the one in the red on the day with a loss of 0.52%. All four logged gains for the week.

[hana-code-insert name=’adsense-article’ /]The fact that the two most defensive sectors led the way on Friday is an interesting development.

The only sector that lost ground on Friday was the energy sector with a loss of 0.52%.

For a second straight night my scans produced more bullish signals than bearish ones.

There were a few stocks on the bullish list that garnered my attention, but the one that looked like the best opportunity was Paychex (Nasdaq: PAYX).

The company gets a 74 EPS rating from IBD and it gets an A on the SMR rating. It has a return on equity of 44.4% and a profit margin of 38.3%, both very impressive. 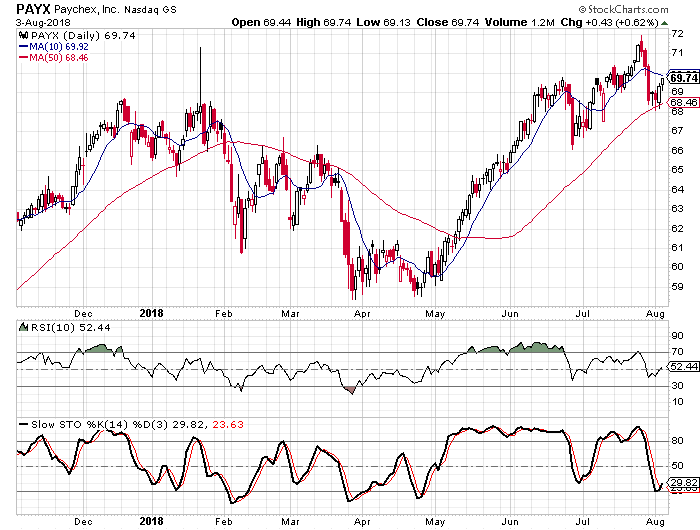 The stock recently dipped down to its 50-day moving average and the trendline acted as support. The stochastic readings dipped down to their lowest level since April last week and have now made a bullish crossover. When this happened in April the stock went on a tear and moved up by 18% in two months.