[hana-code-insert name=’adsense-article’ /]It was another odd day for the indices as two moved higher and two moved lower.

While that is relatively common, it was the paring of the two on each side that was odd.

The Russell led the way with a gain of 0.61% and it was joined on the positive side by the Dow which gained 0.44%.

The Nasdaq was the worst performer with a loss of 1.01% and the S&P lost 0.30%. The Nasdaq was hurt by Facebook’s disappointing earnings report and subsequent 19% drop.

Six of the 10 sectors moved higher with utilities leading the way with a gain of 1.11% and it was followed by the energy sector with a gain of 1.10%. No other sectors gained more than one percent. On the down side, tech was by far the worst performing sector with a loss of 1.55% and once again this can be attributed to Facebook’s decline.

My scans produced more bullish signals than bearish signals for a third straight night with 37 names on the bullish list and 24 on the bearish side. The barometer rose to 12.0 from 2.9 and that is the highest it has been in almost three weeks.

Of the names on the two lists, the one chart that stood out the most was the iShares MSCI EAFE ETF (NYSE: EFA). Obviously being an ETF we don’t have the fundamental ratings from IBD that we usually look for, but IBD does rank it in other categories and the fund doesn’t rank above average in relative strength, accumulation/distribution, and group relative strength. 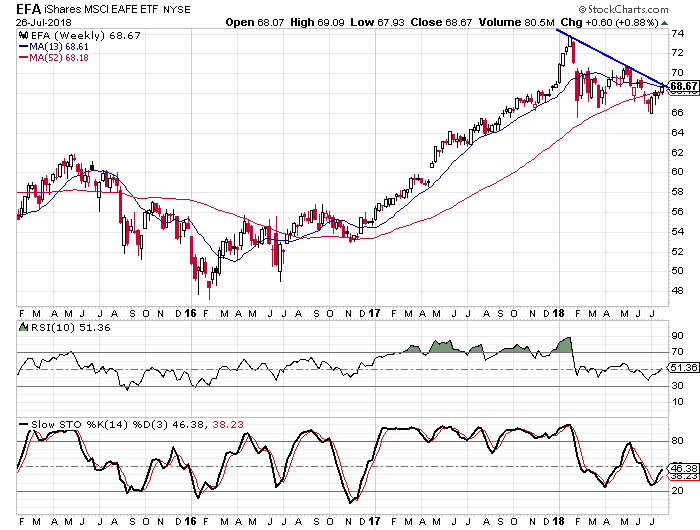 The EFA peaked in January, just shy of the $74 mark and has been trending lower since then. A trendline connects the highs, and the lows have all been in the $66 vicinity. I look for the downward trend to continue and the support might hold up again, but if it gives way, the next support level is down at the $62 level.

Buy to open the Sep18 $71-strike puts on EFA at $2.50 or better. These options expire on September 21. Another move down to $66 would give investors a double on these options. If it moves there in the next two to three weeks, it might but worth selling half and holding on to the second half to see if the support gives way. A move down to $62 would make these options worth $9.00 and that would be good for a gain of 250%. I would suggest a stop at $69.50.