All four indices moved higher yesterday, but the paths to get to positive ground weren’t all the same. The Nasdaq led the way with a gain 1.17% and it was followed by the S&P with a gain of 0.91% and both opened higher and stayed there all day.

The Dow opened lower but rallied back to post a gain of 0.68%. The Russell waffled back and forth from positive territory to negative territory several times throughout the day before finishing with a gain of 0.20%.

[hana-code-insert name=’adsense-article’ /]Nine of the 10 sectors moved higher on the day with the telecom sector losing 0.43% as the only one in the red.

The industrial sector led the way with a gain of 1.43%.

Two other sectors gained more than one percent and they were the tech sector (1.21%) and the healthcare sector (1.19%).

My scans produced more bullish signals than bearish signals for a second straight day with the final count being 36 names on the bullish side of the ledger and 7 on the bearish side.

The barometer moved back in to positive territory for the first time in 11 days with a reading of 2.9, up from -19.3 on Tuesday.

One name on the bullish list that I have suggested for a trade idea before was Zoetis (NYSE: ZTS). On May 7, I suggested a bullish trade idea and that option hit its target of 100% on June 15. The pharmaceutical company gets a 95 EPS rating and an A SMR rating. The company does report on August 2, so you will want to aware of that. The earnings report makes this a little riskier trade idea. 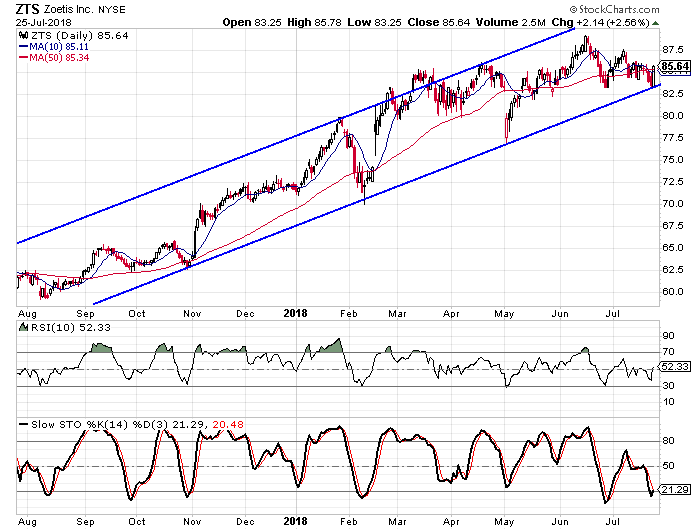 Buy to open the Sep18 $82.50-strike calls on ZTS at $5.20 or better. These options expire on September 21. For these options to double the stock will need to reach $92.90 and that is a gain of 8.5% from yesterday’s closing price. Based on the previous bounces off the lower rail, that seems like a reasonable target gain. I would suggest a stop at $83.