The S&P moved up 0.86% and the Dow was the laggard with a gain of 0.75%. All four opened higher and stayed in positive territory the entire day.

[hana-code-insert name=’adsense-article’ /]Nine of the ten main sectors moved up on the day with the energy sector (-0.11%) being the only one that lost ground.

The tech sector gained 1.41% to lead the way and it was followed by the consumer staples sector with a gain 1.40%.

The healthcare sector was the only other sector to gain over one percent with a gain of 1.05%.

My scans produced 17 bullish signals last night and there were eight bearish signals.

That is the fifth straight night with a greater number of bullish signals than bearish signals. The barometer dropped to 34.4 from 57.4 after these results were added.

There were several stocks on the bullish list that had an A rating and an EPS rating over 80, but the one chart that caught my attention more than any other was Arcelor Mittal (NYSE: MT). The company has good fundamental ratings with an EPS rating of 61 and an SMR rating of a B, but the numbers aren’t great. 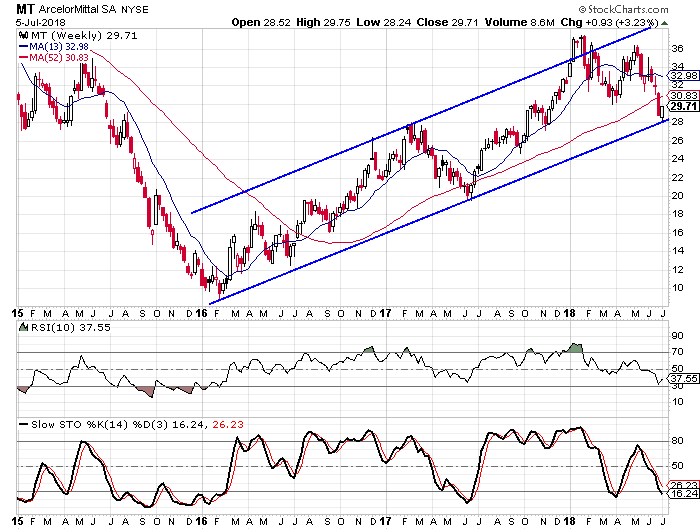 Arcelor has seen a trend channel develop over the last two and a half years and the stock is just above it after hitting it earlier this week. Another factor in the bullish trade idea is the fact that the weekly stochastic readings have reached the 20 level for only the second time in the last two years. In both other instances, the stock rallied nicely afterwards.

Buy to open the Sep18 27-strike calls on MT at $3.80 or better. These options expire on September 21. For these options to double, the stock will need to reach $34.60. Because they are the September options, they have 79 days until they expire. The upper rail of the channel is up near $39, so it won’t even come in to play with these options. I would suggest a target gain of at least 100% with a stop loss at $27.50.