Tuesday saw three of the four indices close lower after all four opened higher. The Russell was the lone one to close with a gain and that gain was 0.32%. The ongoing trade disputes caused stocks to turn lower around midday.

On the plus side, the energy sector led the way with a gain of 0.63% with the other four sectors that were in positive territory gaining between 0.2% and 0.35%.

There were 20 bullish signals and 17 bearish signals at the end of the day. This balanced reading caused the barometer to drop from 81.1 to 57.4.

With five of the last six trade ideas being bullish ones, I felt it was prudent to look for a bearish trade idea in order to keep things somewhat balanced. The stock that stood out to me was Devon Energy (NYSE: DVN). The fundamental picture for Devon is a little mixed with an EPS rating of a 10, but the SMR rating is a B. Earnings and sales have both declined over the last few years. 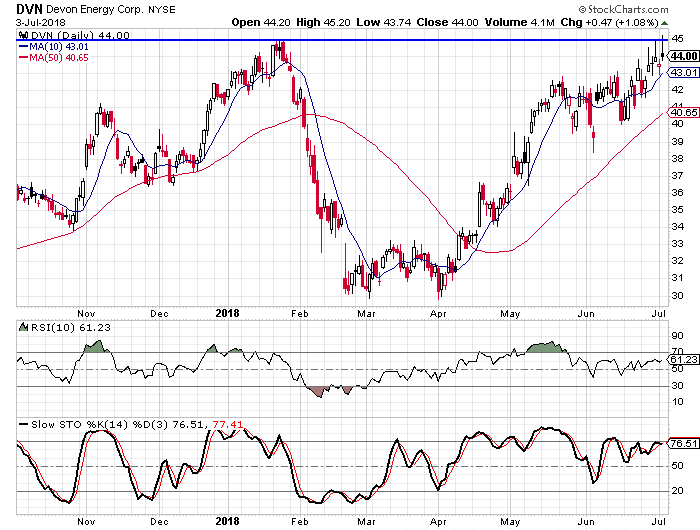 What stood out on the chart for Devon was how the stock struggled at the $45 level back in January. The stock moved above that level on Tuesday, but couldn’t maintain its strength. This created a long-tailed top and signals a possible correction in the coming weeks.