The Dow only lost 0.47% and held up the best, but it is the third straight week of losses for the Dow. For the Nasdaq and S&P this marks the second straight down week while the Russell was up last week.

[hana-code-insert name=’adsense-article’ /]The ongoing trade dispute seemed to be the major focus and what had investors exercising caution.

That caution was confirmed by the sector that led the way which was the utilities sector.

The Utilities Select Sector SPDR (NYSE: XLU) gained 2.58% on the week which was far and away the best performance of all the sectors.

The energy sector continued to rally after the OPEC meeting two weeks ago and the Energy Select Sector SPDR (NYSE: XLE) gained 1.58%.

My frustrations with the daily trade ideas continued this week as we didn’t have any options hit their target gains. I was looking at my barometer and the daily scan results. I took the info and analyzed it against a chart of the SPDR S&P 500 ETF. That chart is below. 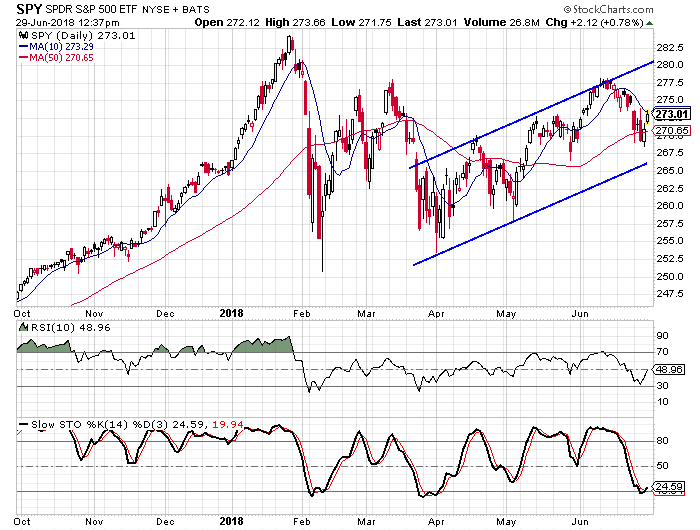 When the overall market dropped in January and February, we had some timely put trades that worked out really well. We also had some timely call trades that were entered at or near the bottom of the downswing. We took advantage of the March downturn once again with some bearish trade ideas and saw success with several bullish trades at the end of April and beginning of May. Looking at the trend channel that has formed since the beginning of April, the swings have not been as pronounced.

This led me to a couple of conclusions—first, the sideways action in mid-May hurt both our bearish and bullish trades. Secondly, the slight downturn this month wasn’t deep enough for some of the bearish trades to hit their targets and some of the stocks we were bearish on moved higher. That is a double blow to the performance. I seem to have been out of sync with the market much of this month. But it happens, I have been doing this for almost 20 years and can tell you this isn’t the first time it has happened and won’t be the last.

Looking at the trade ideas over the course of June and what happened over the past week, we see three trades that were closed. Two that hit their stops and one that I suggested closing in last week’s recap. We see also that so far in the month of June, only one stock hit its target gain and that was Archer Daniels Midland. 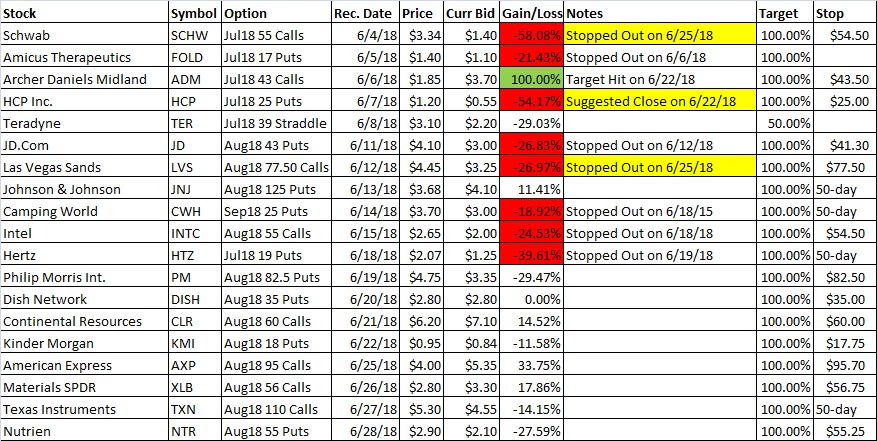 The coming week is likely to be slower in terms of volume due to the Fourth of July holiday falling in the middle of the week. I know many people that are on vacation this week and there were reports that travel this weekend would be busier than what we generally see at Thanksgiving. Even with the holiday on Wednesday, trading activity will likely pick up at the end of the week with two economic reports that garner attention. The Fed minutes come out on Thursday and the June employment report is due out on Friday.