Friday’s trading action was rather odd as two of the indices opened higher and closed higher while the other two opened lower and finished that way. The Dow gained 0.49% to lead the indices, but moved lower in to the close and shaved off quite a bit of the gain.

The S&P was up 0.19% on the day and it also saw some selling in the final minutes of trading. The Nasdaq opened lower and finished with a loss of 0.26% and was the worst performer of the four indices. The Russell lost 0.2%, but it rallied in the last half hour and trimmed off quite a bit of its loss.

The energy sector got a boost from the OPEC meeting and the agreement to up output levels.

No other sectors gained more than one percent.

As for the losing sectors, the financial sector finished with the worst loss at 0.48%.

The sector was down after the latest round of stress tests by the Fed.

For the first time since June 5, my scans produced more bullish signals than bearish signals. There were 48 names on the bullish list and 29 on the bearish list. Once those totals were added to the barometer it turned positive for the first time in weeks. The final reading was only 0.9, but it was positive none the less.

One particular stock on the bullish list caught my eye and that was American Express (NYSE: AXP). The company gets an 88 EPS rating from IBD and an A on the SMR rating. Earnings grew by 38% in the most recent quarter and are expected to grow by 21% in the current year. The company also sports an ROE of 27.7% and a profit margin of 20.9%. 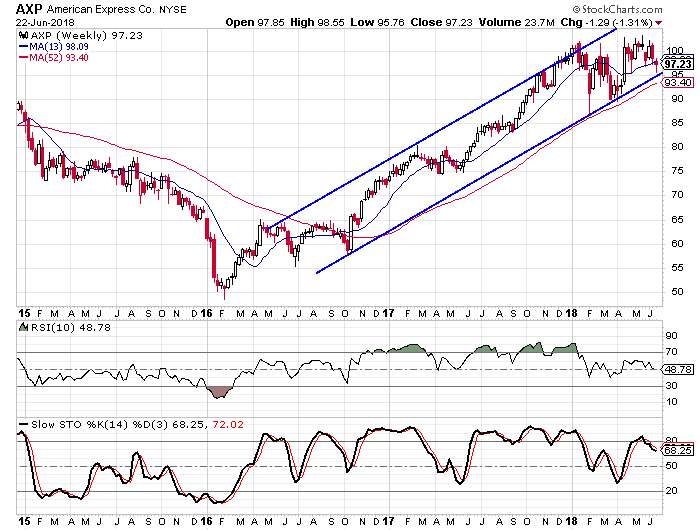 The weekly chart for AXP shows how the company has been moving higher since early in 2016. A trend channel has been dictating trade since mid-2016 and the stock just touched the lower rail of the channel this past week. In addition to the support from the lower rail, the stock has support from its 52-week moving average.