As of noon on Friday, the main indices were primarily down for the week with the Russell 2000 managing a gain of 0.44% as the only one in the green. The Dow got hit the hardest with a loss of 1.82%. The Nasdaq had lost 0.5% and the S&P had lost 0.64%. This is the second straight week for the Dow to lag the other three indices and its second straight week of losses.

This week’s trading action had two overriding themes: trade and the OPEC meeting. The ongoing trade negotiations continued to cloud the global financial markets with certain industries getting hit with the brunt of it.

[hana-code-insert name=’adsense-article’ /]German automakers took big losses and the themes had an impact on the sector performances domestically.

Overall there were only three sectors that gained ground on the week—again that is through noon on Friday.

The energy sector was leading the way with a gain of 2.27%, but that wasn’t the case until a huge rally on Friday.

The announcement that OPEC members had reached an agreement to boost output led to a big reversal for the sector.

The utilities sector also enjoyed a nice move with a gain of 2.2%. The consumer staples sector was the third sector in the green with a modest 0.1% gain.

Looking at the trade ideas over the past month, I am not going to lie—it was a rough week. No other day defines how the week went better than Wednesday. For the most part, stocks were up on Wednesday with three of the main four sectors moving higher and we had a pretty balanced portfolio of calls and puts. But almost all of the positions went against us that day. The stocks we had puts on rose with the market and the ones we are holding calls on fell for the most part. Days like that happen from time to time, but they are frustrating as all get out.

There were a total of five positions that were closed over the past week. Two trade ideas hit their target, WorldPay and Archer Daniels Midland. Three trade ideas hit their stop loss points—Camping World, Intel and Hertz. The two winning trades were both good for 100% gains while the average loss on the three that got stopped out was 27.7%. 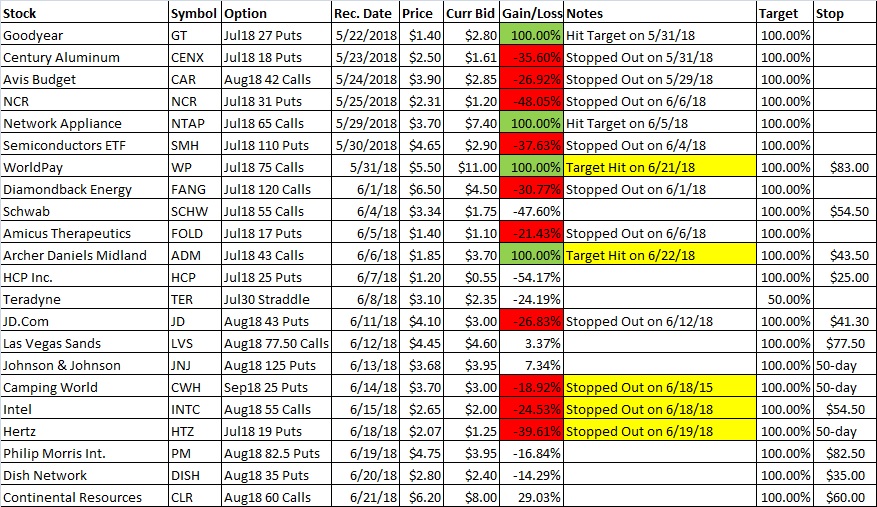 As far as the trade ideas that are still open, Continental Resources got a huge lift from the OPEC news and is up almost 30%. All the other open trades are either at a loss or near breakeven. The ones I am most concerned about are Schwab and HCP. Both of those losses are above 45% at this time and that is above my comfort zone. In fact, I would suggest closing the HCP position even though it hasn’t hit its stop. Those two and the straddle on Teradyne are the only positions involving July options that are still open. With the July options being the front-month expiration now, the time decay will accelerate in the weeks ahead.

The earnings calendar for the week ahead is busier than the past week, but there aren’t any really big reports. The durable goods report is one to keep an eye on as well as consumer confidence. One report that doesn’t usually garner much attention, but could be watched more closely going forward is the PCE Price index. This is the Fed’s preferred inflation gauge and that makes it more important. That report is due out on Friday.