The markets continued to be influenced by trade discussions as President Trump was headed to the G7 meeting in Canada on Friday and ahead of the summit with Kim Jung Un in Singapore next week. China did make another offer to increase their purchases of U.S. goods and that gave the market a boost.

[hana-code-insert name=’adsense-article’ /]There weren’t any major economic reports this past week and the ones that did come out were mostly in line with expectations.

Looking at the sectors, nine of the ten moved higher on the week and they were led by the consumer discretionary sector with a gain of 3.16%.

The materials sector was the second best performer with a gain of 3.0% on the week, at least through midday Friday.

The only sector that had lost ground was the utilities sector with a loss of 3.07%.

Utilities are getting hit on two fronts—it was a risk-on type of week and with interest rates rising they aren’t as appealing to investors.

As far as the trade ideas from the past month, it was a bit of a rough week. The rally caused all of the open put positions to hit their stop-loss points. I don’t usually believe in the saying “a rising tide lifts all boats,” but in this case it seemed to do just that. I try to focus our bearish trade ideas on stocks that are fundamentally below average, but even those stocks rose over the past week. 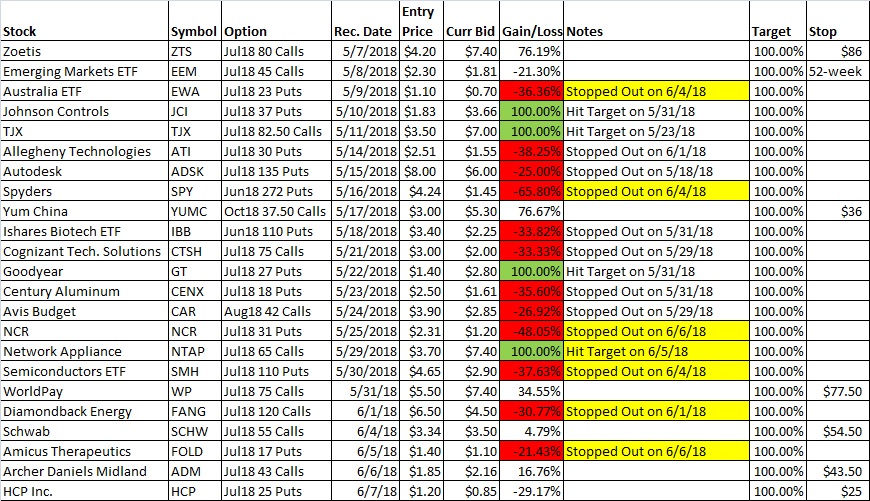 All told, we had six different ideas hit their stop loss points while only one hit its target—the calls on Network Appliance. Both the Zoetis calls and the Yum China calls are close to hitting their targets, but haven’t done so yet. Hopefully both of those positions will hit soon and perhaps a few more will as well.

The week ahead will be busier with economic news, both in terms of quantity and quality. The biggest event of the week will be the Fed meeting and rate decision which is due out Wednesday at 2:00 Eastern Time. We will also have the inflation numbers from the CPI and PPI coming out this week.

I will continue looking for opportunities each day. Hopefully the week ahead sees more targets hit and far fewer stops hit.